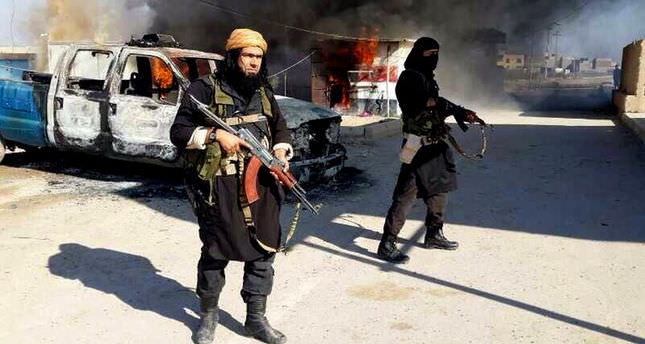 by AA Jun 14, 2014 12:00 am
Armed ISIL militants captured new towns and villages in Iraq's Diyala province on Saturday, according to a local official in the governorate.

"Earlier this morning, armed groups led by the self-claimed Islamic State of Iraq and the Levant have extended their grip in many regions and villages in the north of Diyala," Ahmed Alzercochem, mayor of the Saadia region, told Anadolu Agency.

He said that security forces deserted the region on Thursday, leaving it under the control of armed groups.

"Scores of people from Saadia are leaving the region towards the Kurdish city of Khanaqin and other areas," he said.

On Friday, Kurdish Peshmerga forces took control of the village of Jalula following the abrupt withdrawal of both the Iraqi army and police from the village, as well as from the nearby Saadia region on Thursday night.

The Saadia region -- 60 km north of Diyala -- is a hot spot area, usually experiencing security incidents due to its proximity to the hills of Hamrin, the biggest stronghold of armed groups and one of the disputed areas between Baghdad and Erbil.

The region has a multi-cultural structure encompassing Kurds, Arabs and Turkmens. There are more than 25 clans in Diyala representing both Sunni and Shia Muslims.

The armed groups have also captured Saqlawiyah region in the north of Fallujah after fierce fightinh with Iraqi Army, according to a security source.

The source also said: "The troops began to withdraw from most of the outskirts of Fallujah, which allowed ISIL militants to capture most of these areas without fighting for it."

Dozens of militants dead in Mosul

In the north of Mosul, dozens of ISIL militants and other insurgents were killed amid ongoing Iraqi Air Force raids, according to a tribal source.

He said that a bombardment targeted the Public Canadian facility in the Arabi neighborhood in the north of the city, which was a headquarter of Iraqi army troops before their withdrawal.

Before 2003, the Public Canadian facility was a research and development institute on the war industry and it was supervised by the Iraqi Ministry of Military Industrialization.

In the town Tuz Khurmatu, south of Kirkuk, 14 ISIL militants were pronounced dead in clashes with Iraqi police forces, according to an Iraqi Police official.

Since Tuesday, the Islamic State of Iraq and the Levant, or ISIL, which has developed into a formidable force inside Syria, has extended its reach in Iraq, gaining near-complete control of the northern Iraqi city of Tikrit and seizing Mosul, Iraq's second-largest city.

The group seized large swaths of western Iraq's Anbar Province in January, including much of Fallujah and parts of Ramadi, flashpoints of the U.S.-led war in 2003.