Iraqi PM Maliki tells army that ISIL will be defeated 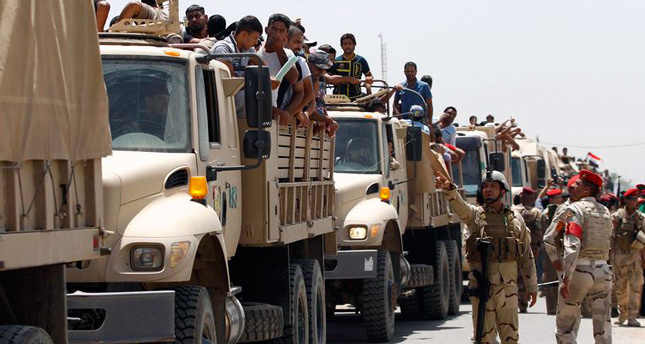 by Anadolu Agency Jun 14, 2014 12:00 am
Iraqi Prime Minister Nuri al-Maliki told army officers in the city of Samarra that volunteers were arriving to help defeat militants who have swept through Sunni Muslim territory towards Baghdad.

"Samarra will not be the last line of defence, but a gathering point and launchpad," Maliki said, addressing miliary officers in the city around 100 km (60 miles) north of the capital on the road to insurgent-controlled Mosul.

"Within the coming hours, all the volunteers will arrive to support the security forces in their war against the militants of ISIL. This is the beginning of the end of them," Maliki, a Shiite Muslim, said in comments broadcast on Iraqi television on Saturday after he travelled to Samarra on Friday.


Iraq's most influential Shi'ite cleric urged people on Friday to take up arms and defend the country against the militants, who overran the city of Mosul earlier this week and have since advanced southwards.

Maliki said the cabinet had granted him unlimited powers to confront the fighters from the self-claimed Islamic State in Iraq and the Levant, ISIL organisation, and an army spokesman said security forces had "regained the initiative" on various fronts.

During his trip to Samarra Maliki visited a revered Shi'ite shrine that was bombed by Sunni militants in 2006, an attack which touched off sectarian bloodletting that killed tens of thousands of people.