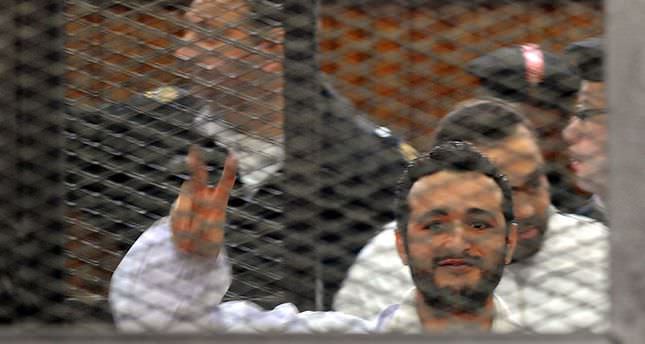 by AA Jun 15, 2014 12:00 am
CAIRO — An Egyptian court on Sunday adjourned until June 23 the trial of 269 people, including prominent activist Ahmed Douma, on charges of rioting and vandalism in connection with deadly clashes between anti-government protesters and security forces in 2011, a judicial source said.

The defendants are accused of attacking the cabinet headquarters in downtown Cairo and assaulting policemen in December 2011.


The clashes had erupted after police stationed outside the government headquarters had detained a protester.


Many protesters had been staging a sit-in against the appointment of Kamal al-Ganzouri as prime minister by the then ruling Supreme Military Council.


Al-Ganzouri had served as prime minister under longtime autocrat Hosni Mubarak who was ousted in the wake of the January 2011's popular uprising.


Around 15 people were killed and hundreds injured in the ensuing violence.


The Institut d'Égypte, a building founded at the time of the French military campaign in Egypt and containing tens of thousands of rare manuscripts, was burnt down in the violence.


Some of the defendants, currently released, had received a pardon from ousted president Mohamed Morsi in October 2012, a few months after he became the country's first freely elected president.


However, the army-installed interim government had decided to review all pardons issued by Morsi during his single-year rule after his ouster last summer.


Douma, along with two other prominent activists, is already serving a three-year jail term for staging an unlicensed protest in downtown Cairo in November.