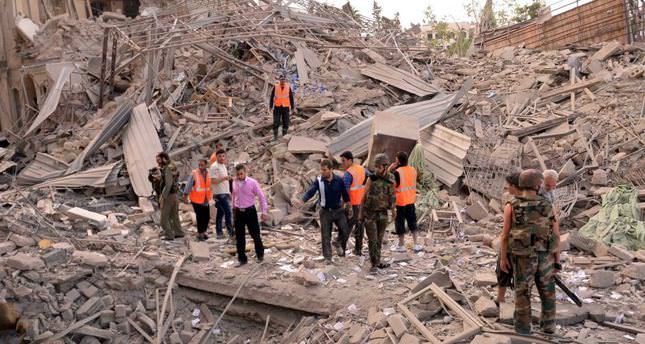 by AA Jun 16, 2014 12:00 am
At least 36 people were killed Monday in a barrel bomb attack by Syrian regime's helicopters against opposition forces who have controlled the Sukkari district of Aleppo, activists said.

The Syrian Revolution General Committee said in a statement that the regime's helicopters attacked a market place where many women and children were among those killed.

The opposition said that civil defense teams are continuing their rescue operations but the regime's helicopters have bombed other regions of the city too.

Meanwhile, the Local Coordination Committee of Syria, reported that Syrian warplanes have destroyed a hospital in Tell Rifaat district, in the north of Aleppo, but they did not give casualty numbers.

Syria has been gripped by almost constant fighting since the regime launched a violent crackdown in response to anti-government protests in March 2011, triggering a conflict, which has spiraled into civil war.

The UN has stopped updating its death toll for the country because an official count has become too difficult to verify. At least 100,000 deaths were recorded in the last official count in July 2013.