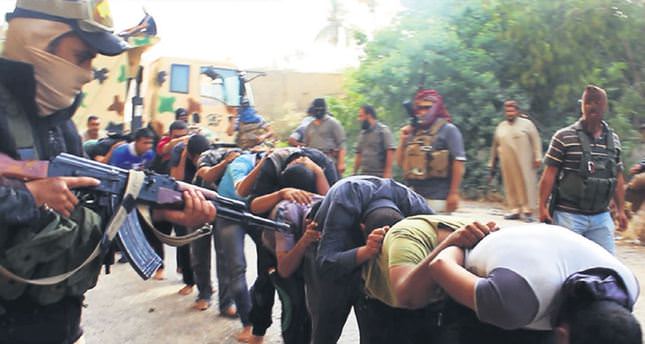 Militants from the Islamic State of Iraq and the Levant (ISIS) that seized much of northern Iraq posted photos showing its fighters shoot dead 1,700 captured Iraqi soldiers

ISIS militants have executed 1,700 captured Iraqi soldiers and shared the photos of the massacre on the social media site Twitter. ISIS said the execution was carried out in the province of Salaheddin, north of Baghdad.

Militants from Islamic State of Iraq and the Levant (ISIS) that swept across northern Iraq and captured two major cities last week has posted graphic photos that appear to show its fighters massacring hundreds of captured Iraqi soldiers. ISIS claimed the killing of 1,700 soldiers.

The authenticity of the photos, which were shared on Twitter and elsewhere and supposedly taken in Salaheddin province, north of Baghdad, could not be independently confirmed.

The militants said in one photo caption that they had executed hundreds of soldiers. The photos seen by AFP showed dozens of bodies.

A major offensive spearheaded by ISIS but also involving supporters of executed dictator Saddam Hussein has overrun all of one province and chunks of three others since it was launched on Monday.

In one photo, militants watch as men in civilian clothes, their backs bent and feet bare, facing the ground, shuffle forward in a line.
The men are then loaded into trucks, including at least one captured security forces vehicle.

Another photo shows men being made to lie down in a shallow ditch, as militants, including a man bearing the ISIS flag, look on.

A man in a yellow shirt seems to be pleading for his life. The assault rifle-armed militants are then shown apparently firing into the ditch.

Another picture shows a militant aiming his Kalashnikov assault rifle into a ditch holding a double line of men with their hands behind their backs, blood pooling in the sand.

A cloud of dust rises from the ditch, apparently from gunshots.

Photos also show a man wearing a red beret of the type issued to Iraqi soldiers holding his Kalashnikov in one hand as he fires into a line of men in what appears to be a third ditch.

The photos appear to show at least three separate places in which men were executed and possibly a fourth, though it is difficult to determine due to varying camera angles.

On Saturday, Iraqi security forces found the burned bodies of 12 policemen after retaking the town of Ishaqi north of Baghdad, pointing to another atrocity carried out by militants.

Security forces performed poorly when faced with the militant offensive, in some cases abandoning vehicles and positions and shedding uniforms to flee.

But they appear to be recovering from the initial shock of the onslaught and have retaken some areas north of the capital.

Meanwhile, the insurgent offensive that has threatened to dismember Iraq spread to the northwest of the country on Sunday, when militants launched a dawn raid on a town close to the Syrian border, clashing with police and government forces.

ISIS fighters have stormed several towns on the road to Baghdad after seizing Mosul nearly a week ago - an offensive that only stalled as it approached the mainly Shi'ite capital.

In Baghdad on Sunday, a suicide attacker detonated explosives in a vest he was wearing, killing at least nine people and wounding 20 in a crowded street in the center of the capital, police and medical sources said.

At least six people were killed, including three soldiers and three volunteers, when four mortars landed at a recruiting center in Khlais, 50 kilometers (30 miles) north of Baghdad.

The army gathered volunteers to join the fight to regain control of the northern town of Udhaim from ISIS militants.

They were some of the thousands who responded to a call by the country's most influential Shi'ite cleric to take up arms and defend the country against the hardline insurgents, many of whom consider Shiites as heretics.
RELATED TOPICS