Over 150 Palestinians detained in West Bank 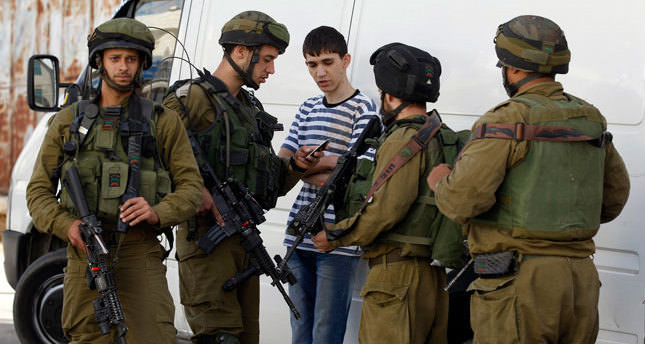 by AA Jun 16, 2014 12:00 am
JERUSALEM — The Israeli army confirmed Monday the detaining of over 150 Palestinians in the West Bank since Sunday against the background of the presumed abduction of three teenage Jewish settlers in the Palestinian territory West Bank.

"Over 150 terrorist suspects arrested so far," the Israeli army said on its official Twitter account. "We are determined to bring the perpetrators to justice," it added.

Israeli army spokesman Peter Lerner wrote on his Twitter account that around 40 Hamas-affiliated leaders and operatives were detained in overnight raids in the West Bank.

Tension has been running high in the Palestinian territories since three teenage Jewish settlers went missing late Thursday in the southern West Bank.

Israeli Prime Minister Benjamin Netanyahu has accused Hamas of abducting the trio, a claim Hamas has since dismissed as "stupid."
No Palestinian group has claimed responsibility for the alleged kidnapping thus far.

Israeli radio quoted political sources as saying that the government is mulling a proposal to expel senior Hamas members based in the West Bank to the Gaza Strip.
Last Update: Jun 16, 2014 1:38 pm
RELATED TOPICS