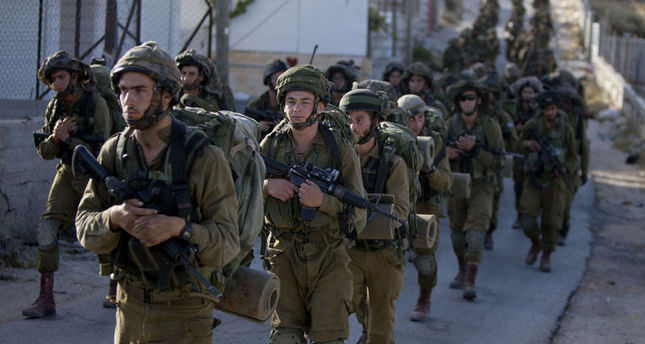 by AA Jun 17, 2014 12:00 am
Israeli forces detained at least 55 Palestinians in Tuesday dawn raids throughout the West Bank against the backdrop of ongoing search operations for three Jewish teenagers who disappeared last Thursday from a West Bank settlement, a Palestinian NGO has said.

Most detentions occurred in the West Bank cities of Hebron, Ramallah, Nablus and Jenin, the Palestinian Prisoners' Society, a local NGO, said in a statement.

The figure is 14 short of that given by Israeli army spokesman Avichay Adraee, who tweeted earlier that Israeli forces had detained a total of 41 Palestinians.

Tension has run high in the Palestinian territories since the three settlers went missing late Thursday from the Jewish-only Gush Etzion settlement near the southern West Bank city of Hebron.

Israel has accused the Gaza-based Hamas movement of kidnapping the settlers, holding the West Bank-based Palestinian Authority (PA) responsible for their safety.

Hamas, for its part, has dismissed the Israeli claims as "stupid."

No Palestinian group has claimed responsibility for the alleged kidnapping.