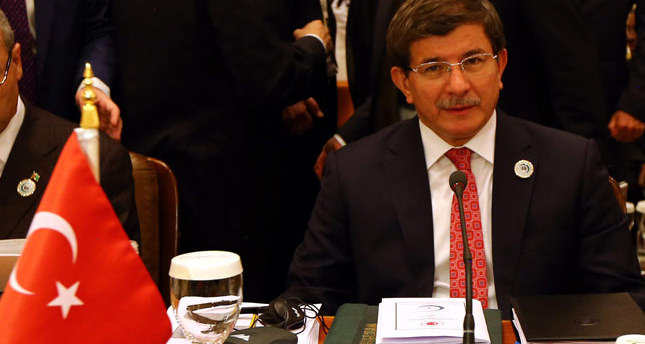 by AA Jun 18, 2014 12:00 am
Turkish foreign minister reiterated his concern over the recent developments in Iraq as unrest expands in the country causing a mass displacement of civilians since June 10.

Militants led by the self pro-claimed Islamic State of Iraq and Sham (ISIS) have extended their reach across Iraq. Ahmet Davutoglu speaking at the foreign ministers summit of the Organization of Islamic Cooperation in Jeddah, noted that the recent activities "constitute a grave threat for the security and stability of the wider region."

He called for the immediate release of all abductees including the 49 Turkish Consulate staff in Mosul, and urged Muslim nations to join Turkey's call to all armed groups and militias to refrain from harming civilians.

"I want to make a call from here to all Muslim scholars, opinion leaders and responsible statesmen to join in making a united call to prevent sectarian strife which could harm not only the historic cities, but also the very essence of Islamic solidarity and identity," he added.

He also expressed concern that Islam was referred to in conjunction with terrorism and called on the Muslim world to reject all kinds of sectarianism and to protect and promote Islamic values.

He also spoke on the crisis in the Middle-east region and said, "the developments in Iraq should not let us forget what is happening in Syria."

"We cannot turn a blind eye to this century's worst tragic humanitarian situation," he added.

More than 150,000 people have been killed during the three-year conflict, which has left more than 6.5 million people internally displaced according to the U.N.

Nearly 2.5 million Syrians are also registered as refugees in neighboring countries, including Turkey, Lebanon and Iraq.