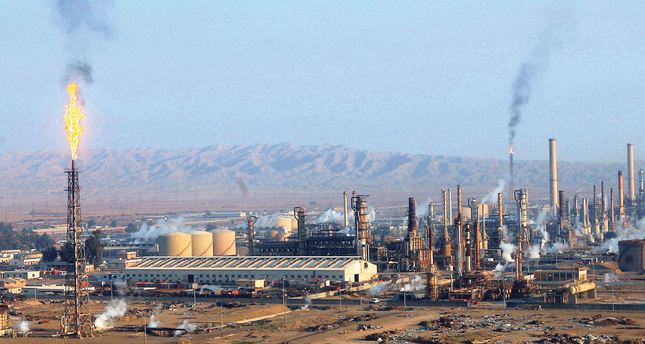 As ISIS continues its march toward Baghdad, Iraq's largest oil refinery is now in the hands of the extremist group, posing a considerable security threat to many Iraqis and prompting many to flee from their homes

Iraq's largest oil refinery, located north of Baghdad in the city of Baiji in Salaheddin province, was attacked by Islamic State of Iraq and al-Sham (ISIS) militants with machine gun fire and mortars yesterday. According to Reuters, the militants attack on the oil refinery started early yesterday from outside two of the three main entrances to the refinery after which they managed to enter the facility and capture the refinery. After the militants took control of Baiji refinery, the Iraqi Air Force started bombing the area, setting a number of fuel tanks on fire.

Officials told AFP that before heavy fighting erupted at the refinery, it had already been shut down and many employees evacuated due to the fact that major towns seized by the militants were no longer being supplied with refined products. Baiji is considered of crucial importance and is the location where most oil pipelines and power stations were established.

After the militants announced their march toward Baiji, Iraqi security forces were sent to the area to secure energy installations, security officials said. The refinery has been under siege since militants began a major military offense in Northern Iraq last week. Reports from last week stated that Iraq's main oil refinery was being secured by Iraqi government security forces.

According to Reuters, Iraqi Oil Minister Abdul Kareem Luaibi also stated last week that the government forces had Iraq's Baiji oil refinery, the country's largest refinery, under control. An official at the oil refinery said at the time, "the Baiji refinery is totally secured by the Special Forces and operating normally now."

The unstoppable advance of ISIS militants has led to rising fears and security concerns resulting in thousands of Iraqis reportedly leaving their homes. After taking near-complete control of the northern Iraqi city of Tikrit, ISIS militants spread fear across the region, prompting many Iraqis to leave their homes in the Tal Afar region and seek refuge in neighboring cities. According to Anadolu Agency, after ISIS militants seized the Tal Afar city, 2,000 people reportedly left on Tuesday and fled to the city of Sinjar. "Nearly 40,000 people have been displaced from Tal Afar over the last few days and travelled mainly to Sinjar city," Sinjar Police Chief Sayed Ali Shingali told Anadolu Agency.

Following ISIS attacks in the northern region of the country, authorities have been incapable of stopping militants' attacks against government buildings. Some 150,000 people have started leaving their homes, moving to more secure places, as authorities have set up camps in nearby towns, according to the reports.

After militants' takeover of Mosul, Iraq's second-largest city, it was also reported that thousands of families fled north from Mosul to the nearby Kurdistan region, where the Kurdish militia, known as the Peshmerga, has been heavily deployed.

Due to growing insecurity in the country, the latest reports state that about 60 foreign workers, including 15 Turks, were captured by ISIS in northeastern Iraq on Tuesday afternoon.

An Iraqi worker, who was captured by militants and later released, told Anadolu Agency that they were captured while trying to flee from clashes. In addition, 40 Indian men were reportedly abducted while being evacuated from Mosul. Indian officials stated that they were unable to contact those thought to have been kidnapped. "Despite our best efforts, we haven't been able to establish contact with them at this stage. There are no reports of any Indians targeted or involved in any violent incidents," said Foreign Ministry Spokesman Syed Akbaruddin.

The fighting has also raised alarms outside Iraq as U.K. Prime Minister David Cameron stated yesterday that ISIS insurgents are considering attacking Britain, according to Reuters. "The people in that regime as well as trying to take territory are also planning to attack us here at home in the United Kingdom," said Cameron.
Last Update: Jun 19, 2014 1:05 am
RELATED TOPICS