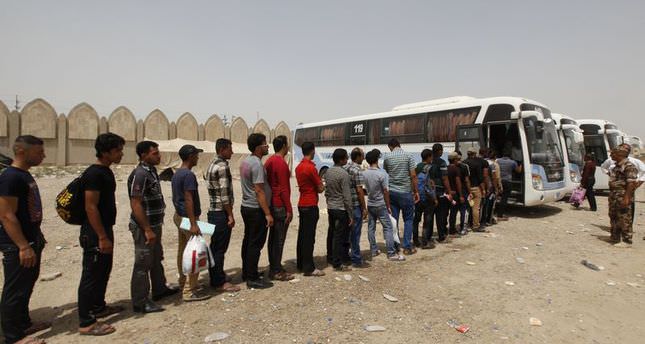 by Jun 20, 2014 12:00 am
Iraqi forces were massing north of Baghdad on Friday, aiming to strike back at Sunni Islamists whose drive toward the capital prompted the United States to send military advisers to stiffen government resistance.

President Barack Obama offered up to 300 Americans to help coordinate the fight. But he held off granting a request for air strikes from the Shi'ite-led government and renewed a call for Prime Minister Nuri al-Maliki to do more to overcome sectarian divisions that have fueled resentment among the Sunni minority.

In the area around Samarra, on the main highway 100 km (60 miles) north of Baghdad, which has become a frontline of the battle with the Islamic State of Iraq and the Sham, the provincial governor, a rare Sunni supporter of Maliki, told cheering troops they would now force ISIS and its allies back.

A source close to Maliki told Reuters that the government planned to hit back now that it had halted the advance which saw ISIS seize the main northern city of Mosul, capital of Nineveh province, 10 days ago and sweep down along the Sunni-populated Tigris valley toward Baghdad as the U.S.-trained army crumbled.

Governor Abdullah al-Jibouri, whose provincial capital Tikrit was overrun last week, was shown on television on Friday telling soldiers in Ishaqi, just south of Samarra: "Today we are coming in the direction of Tikrit, Sharqat and Nineveh.

"These troops will not stop," he added, saying government forces around Samarra numbered more than 50,000.

This week, the militants' lightning pace has slowed in the area north of the capital, home to Sunnis but also to Shi'ites fearful of ISIS, which views them as heretics to be wiped out. Samarra has a major Shi'ite shrine. And it was for killings of Shi'ites in nearby Dujail that Maliki had Saddam hanged in 2006.

The participation of Shi'ite militias and tens of thousands of new Shi'ite army volunteers has allowed the Iraqi military to rebound after mass desertions by soldiers last week allowed ISIS to carve out territory where it aims to found an Islamic caliphate straddling the Iraqi-Syrian border.

"The strategy has been for the last few days to have a new defense line to stop the advance of ISIS," a close ally of Maliki told Reuters. "We succeeded in blunting the advance and now are trying to get back areas unnecessarily lost."

At Duluiya, between Samarra and Baghdad, residents said a helicopter strafed and rocketed a number of houses in the early morning, killing a woman. Police said they had been told by the military that the pilot had been given the wrong coordinates.