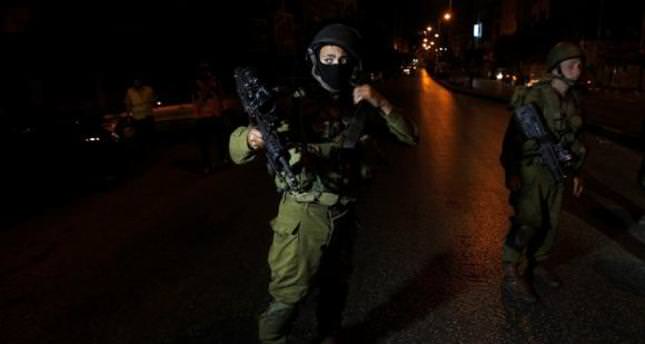 by Jun 20, 2014 12:00 am
Israeli troops killed a Palestinian teenager in the occupied West Bank on Friday and arrested 25 people, pursuing a weeklong crackdown against Palestinians and house-to-house searches for three Israeli teenagers who went missing eight days ago.

Palestinian medics said Mohammed Dudin, 15, was killed in the village of Dura, near the city of Hebron in the West Bank. The Israeli military said troops had fired live ammunition when rocks and firebombs were thrown at them during an arrest raid.

Israel said it arrested 25 people overnight in some 200 towns, refugee camps and cities in the West Bank, totalling 330 arrests including 240 from Hamas, the group Israel accuses of kidnapping three Israeli teenagers who went missing near a Jewish settlement on June 13.

Dudin was the second Palestinian killed since these raids began.

Some 1,150 sites in the territory have thus far been searched, the military said, in its mission to deal a blow to Hamas while in pursuit of Gil-Ad Shaer and U.S.-Israeli national Naftali Fraenkel, aged 16, and Eyal Yifrah, 19.

Israel has also struck out at welfare organisations it accuses of aiding Hamas, a group that opposes Israel's existence. Soldiers raided 30 such institution on Thursday.

Israel also said it was shutting down activities of the British-based Islamic Relief Worldwide (IRW).

In the Gaza Strip, Israel carried out air strikes against three militant targets after rockets were fired at Israel.

There were no reported casualties in these attacks.

Palestinian President Mahmoud Abbas has condemned the kidnappings but has charged that the extent of Israel's raids amounted to collective punishment and urged they be condemned.

Hamas has not claimed responsibility for the kidnappings, but spokesman Sami Abu Zuhri said in Gaza on Thursday "regardless of who was responsible ... the Palestinian people have the right to use all forms of resistance in order to liberate land and people."