Syria chemical weapons destruction deadline not to be extended 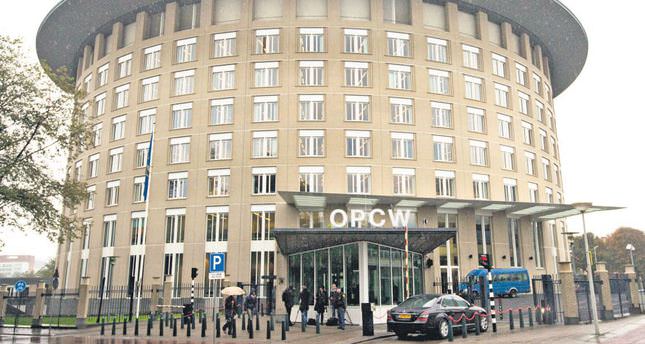 Head of the OPCW Ahmet Üzümcü says that if remaining chemical weapons are not destroyed on time, the matter will be dealt at the United Nations Security Council

The Syrian leadership will need to hand over all its chemical wepons to the U.N. by June 30, says the head of the OPCW Ahmet Üzümcü, adding that the matter will be brought to the U.N. Security Council if the deadline is not met.

Ahmet Üzümcü, director general of the Organization for the Prohibition of Chemical Weapons (OPCW), spoke with Turkish columnists and journalists at a closed-door meeting which was held on Thursday by Prof. Dr. Mustafa Aydın, Rector of Kadir Has University. A large part of the meeting focused on concerns over Syria's arsenal of chemical weapons, the threat to regional and global security if Syrian chemicals fall into militants' hands and the OPCW's responsibilities and capabilities for the total destruction of declared chemical weapons stockpiles.

Daily Sabah asked Ahmet Üzümcü, the head of the OPCW, whether Syria will miss the June 30 deadline for destroying the remainder of the country's arsenal, which accounts for 8 percent of the overall arsenal. Üzümcü stated that Syria should complete the destruction of its entire arsenal, including the majority of the remaining weapons at one site, by the target date of June 30, adding that the matter would be taken to the Security Council in the event the deadline is not met. "There will be no further deadline given to Syria to complete the destruction if the deadline is not met by Syrian authorities," said Üzümcü.

In consideration of the significant achievements the OPCW has made so far, which he believes needs to be acknowledged, the director general stated that the declared amount of chemical weapons stockpiled in Syria is currently 1,300 metric tons, "Not a large amount compared to Russia with less than 40,000 metric tons and the United States with 29,000 metric tons," as 8 percent, or some 100 metric tons of Syrian chemicals, still remain to be removed.

Since the disarmament operation began after Syria acceded to the Chemical Weapons Convention in 2013, 92.03 percent of chemicals have been removed, according to the OPCW report on Syria. Norwegian and Danish ships traveling to Italy shipped Syrian chemicals out of the country around June 8. Üzümcü stated that more toxic materials were carried by Danish ships. The chemicals that travelled to Italy will be transferred to U.S. Navy vessels, which have been tasked with neutralization of chemicals in international waters. The remaining 8 percent is packed up and stored in a single site; however, Syrian authorities would not allow them to be removed due to the security situation.

On Thursday, ISIS fighters in Iraq seized one of Saddam Hussein's former chemical weapons plants that still contains a stockpile of old weapons, according to AFP. The latest attacks by militants would expectedly raise global security concerns due to existing fear of terror in the Middle East. Üzümcü stated that the rebel group does not possess toxic chemical agents which could pose a threat to global and regional security. "Currently, 12 active chemical weapons production facilities need to be destroyed. There are no considerable amounts of chemicals left in Syria," said Üzümcü, pointing out, "Even if ISIS militants are able to seize stockpiles of these weapons, this would not create a significant security problem in the region."

U.S. State Department spokesperson Jen Psaki said on Thursday any remaining materials in the production facilities cannot be used to create a functional weapon for military purposes because they are old and "very difficult, if not impossible, to safely move."

The OPWC, an inter-governmental organization located in The Hague, is responsible for the destruction of chemical weapons, as well as the prevention of their re-emergence. Many states bound by the Chemical Weapons Convention (CWC) to destroy chemical weapons are obliged to place the highest priority on the safety of people and on protecting the environment.

Albania, India and a third country, which does not want to be named, have completed destruction. Russia has completed destruction of 80 percent of its chemicals. The elimination process continues in five different production facilities under the observation of Fact-Finding Mission (FFM) staff. The OPCW expects that Russia will be able to remove all its chemicals by the end of 2015. The United States has also removed 90 percent of its chemicals, reportedly spending $26 billion (TL 55.6 billion) to establish neutralization facilities in Kentucky and Colorado.

During the meeting, Üzümcü also underscored that their goal is to make 190 states parties to implement the Convention. He also points out that national legal regulation is required for the implementation of the convention, adding that 80 member states have failed to make their regulations.

OPCW Director Ahmet Üzümcü participated in The Academic Council on the United Nations System (ACUNS) 2014 Annual Meeting which was hosted on 19-21 June, 2014 by Kadir Has University. Scholars and experts in relevant fields participating in this meeting entitled "Global Governance: Engaging New Norms and Emerging Challenges" found the opportunity to address a number of questions concerning the reliability and effectiveness of contemporary global governance.

Director General Üzümcü took office on July 25, 2010. Prior to his appointment, he served as the permanent representative of Turkey to the UN Office in Geneva from 2002 to 2004. He also served as consulate general in Aleppo, Syria and ambassador to Israel from 1999 to 2002