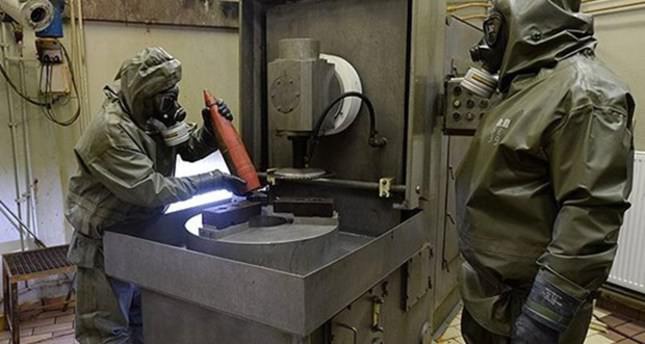 by AA Jun 23, 2014 12:00 am
U.S. Secretary of State John Kerry congratulated the joint UN-OPCW mission for the removal of the last 7.2 percent of Syria's chemical weapons stockpile from the country.

"In the coming weeks, the United States stands ready to begin destruction of a large amount of Syria's chemical weapons precursors," Kerry said in a written statement issued from the U.S. State Department on Monday.

Earlier in the day, the joint mission overseeing the elimination of Damascus' chemical weapons stockpile announced that 100 percent of Syria's declared chemical weapons material had been destroyed or removed from Syria.

Kerry lauded Denmark, Norway, Finland, Italy, and the United Kingdom for their essential role in the removal and destruction efforts.

Regarding the elimination of the removed material, Kerry said: "This unprecedented mission, deploying unique American capabilities, will ensure that they will not be used against the Syrian people or against us, our allies, or our partners, in the region or beyond."

He also expressed concerns over the reports of systematic use of chlorine gas in opposition-held areas in Syria.

"The Syrian regime has dragged their feet on destroying production facilities; the international community has questions with regard to Syria's declaration that must be adequately answered; and we are appalled at the death toll from the regime's continued attacks on its own people, as well the grave humanitarian crisis," he said.

Syria accepted a removal plan in 2013 following an alleged chemical chemical gas attack by the regime, in which nearly 1,500 civilians, including women and children, died in the Ghouta suburbs of the capital Damascus on August 2.

Syria has been gripped in an ongoing civil war since 2011, which has killed over 100,000 people and displaced almost half of the population, according to the U.N.