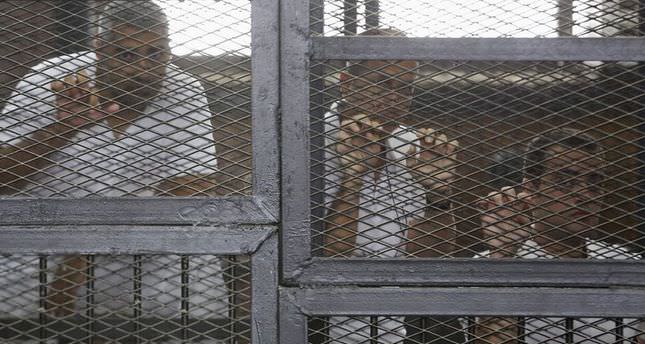 An Egyptian court on Monday sentenced three Al-Jazeera journalists to between 7 and 10 years in jail on terrorism-related charges after a trial dismissed by rights groups as a politically motivated sham.

Amnesty International's observer at the trial, Philip Luther, said the prosecution "failed to produce a single shred of solid evidence" backing the charges. In a statement, he called the sentences "a travesty of justice."

U.S. Secretary of State John Kerry made a surprise visit to Cairo and met the coup leader and current president, Abdul-fattah al-Sisi, on the eve of the verdict, yet just a day after his visit, Kerry was scathing in his criticism of the verdict.

"Yesterday, President al-Sisi and I frankly discussed these issues and his objectives at the start of his term as President," Kerry said in a statement released to the press. "I call on him to make clear, publicly, his government's intention to observe Egypt's commitment to the essential role of civil society, a free press, and the rule of law."

Egypt's foreign ministry on the other hand appeared to reject the wave of international criticism, putting out a statement on Monday evening claiming the country's judiciary "enjoys full independence, and the new constitution provides safeguards to ensure media freedom and to guarantee due process in judicial proceedings".

Al-Sisi said on Tuesday that he would not interfere with judicial verdicts, following the international outcry over lengthy the prison sentences given to the three journalists, "We must respect judicial rulings and not criticize them even if others do not understand this," he stated.

Mohammed, the Aljazeera's team producer, had three years added to his 7-year sentence for possessing ammunition, based on a single spent cartridge he picked up at a protest as a souvenir. A Dutch freelance journalist — who did not work for Al-Jazeera but met Fahmy once for tea at the hotel where the team lived and worked — received a 10-years prison sentence as well. She and two British Al-Jazeera journalists who got the same sentence were tried in absentia.

Dutch, British and Australian Foreign ministries said that Egypt is acting contrary to the international obligations after hearing the sentences.

Meanwhile Hundreds of journalists have gathered with the BBC staff to protest against the seven-year jail terms outside New Broadcasting House in London.

The UN Secretary-General Ban Ki-moon and UNCHR Navi Pillay also expressed their deep concern over the court decisions, particularly the confirmation of death sentences for 183 people earlier and the sentencing of journalists.

"These verdicts are a stark admission that in today's Egypt, simply practicing professional journalism is a crime and that the new constitution's guarantees of free expression are not worth the paper they are written on." Human Rights Watch said on Monday.

Sisi took control of the government in July of last year after ousting the democratically-elected president, Mohamed Morsi, and his Muslim Brotherhood group from power.

The authorities have launched an all-out crackdown on Morsi's supporters and the members of his Brotherhood since his ouster, hundreds have died, thousands are arrested and hundreds have been sentenced to death after speedy trials. The Brotherhood was banned and declared a terrorist group.