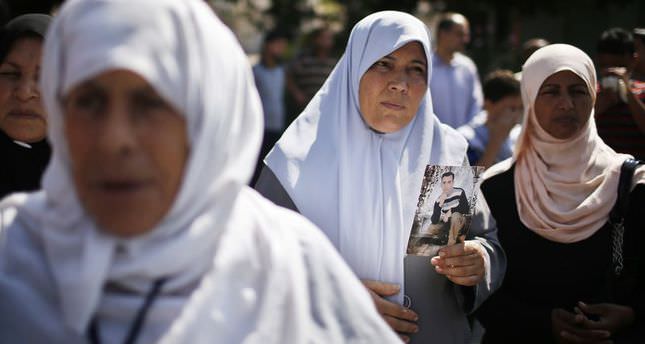 by AA Jun 25, 2014 12:00 am
Scores of Palestinian detainees in Israeli prisons ended a weeks-long hunger strike after reaching an agreement with Israeli prison authorities, the Palestinian government confirmed on Wednesday.

"A committee representing the striking prisoners reached a decision with Israeli prison authorities to suspend the hunger strike on condition that some of the prisoners' demands are met," Shawqi al-Aissa, undersecretary of the Palestinian Prisoners' Affairs Ministry, told a press conference in Ramallah.

"The committee will meet with striking prisoners to inform them of the details of the agreement," al-Aissa said. "The agreement's details will be announced either today or tomorrow by the strike leadership committee.

"Speaking at Wednesday's press conference, Qadura Fares, head of the Palestinian Prisoners' Society, an NGO, said the agreement called for the reversal of all sanctions imposed on the prisoners at the beginning of their hunger strike.

According to Fares, hunger-striking prisoners that were transferred – as a punitive measure – from their prison cells to facilities with tighter security will be allowed to return to their previous places of detention.

"The agreement also calls for the continuation of negotiations between prisoners and the Israeli prison authorities regarding the prisoners' other demands," he added.

Earlier Wednesday, Fares paid tribute to the hunger-strikers, saying they had succeeded in realizing a "victory."

"The [hunger-striking] prisoners did not acquiesce or surrender," Fares told Anadolu Agency. "They emerged victorious at the end of their battle."

Scores of Palestinian "administrative" detainees have remained on hunger strike for more than six weeks to protest their ongoing detention-without-charge by Israeli authorities.

In a show of solidarity, they have reportedly been joined by scores of other Palestinian prisoners.

According to the Palestinian Prisoners' Society, around 5270 Palestinians – including 191 in administrative detention – continue to languish in jails throughout the self-proclaimed Jewish state.