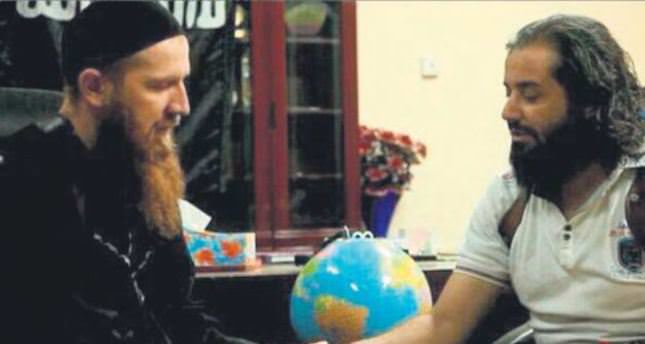 unit of the al-Qaeda-affiliated Nusra Front located in a critical border town has given an oath of allegiance to ISIS, as the organization seeks to expand on its recent gains

After months of clashes between the Nusra Front, al-Qaeda's official Syrian arm, and the Islamic State in Iraq and al-Sham (ISIS), a local unit of Nusra in the critical town of Albu Kamal on the Iraqi border pledged loyalty to ISIS, giving ISIS control over both sides of the frontier.

The British-based Syrian Observatory for Human Rights confirmed the news on Wednesday and an ISIS-related Twitter account featured a picture of an Egyptian Nusra commander shaking hands with Omar al-Shishani, an ISIS leader of Chechen origin. "JN [Jabhat al-Nusra] leader in #Albukamal Abu Yusuf Al Masri announced his repentance & give bayah (an oath of allegiance) to #ISIS via Shaykh Umar al Shishani" a posting on the account read.

Al-Nusra's oath of loyalty in Albu Kamal comes days after Iraqi security forces abandoned Al-Qaim, just across the border, and ISIS and other Sunni militants seized it on Saturday. "The pledge comes amid advances by ISIS in Deir Ezzor province" in eastern Syria on the Iraqi border, Rami Abdel Rahman, the director of the Syrian Observatory for Human Rights said.

This move is considered significant by experts as Ayman al-Zawahiri, the leader of al-Qaeda, has previously disowned ISIS and proclaimed the Nusra Front as al-Qaeda's official Syrian affiliate. The move came to reflect how ISIS is fast gaining the upper hand in eastern Syria, where it has been locked in combat with Nusra fighters and allied local rebels for most of this year. "The dispute started when ISIS, which was originally growing in Iraq, wanted to start marching into Syria, but al-Qaeda presented in Nusra and the Free Syrian Army objected and said that Syria is their fight.

This oath means that this area and branch of Nusra is totally under the control of ISIS now," Alaa Walid, a Cairo-based Syrian journalist and expert told Daily Sabah.

Opposition activists in Albu Kamal were reported as saying that there is a lot of tension, and the situation is only going to get worse in the area, adding that hundreds of thousands of people, including displaced families from neighboring Iraq as well as flashpoint areas in Syria, are living in Albu Kamal, and that it would be a "catastrophe" if fighting broke out in the town.

ISIS was only formed in April 2013 but international relations experts say it is fast replacing al-Qaeda as the world's most dangerous terrorist group.
In Iraq, ISIS has marched virtually unopposed toward Baghdad and now controls major border posts on the frontier with Syria.

Last week, ISIS captured three key towns in the region, which runs along the Euphrates River between Syria and Iraq. The towns are located near Deir al-Zor's military airport, which is still under the control of the Syrian army.

The group, which aspires to create an Islamic state that straddles Iraq and Syria, also controls large parts of eastern Syria, where it has both clashed with rival rebel groups and occasionally fought alongside them, complicating the three-year-old insurgency against Syrian President Bashar Assad.
Last Update: Jun 27, 2014 1:21 am
RELATED TOPICS