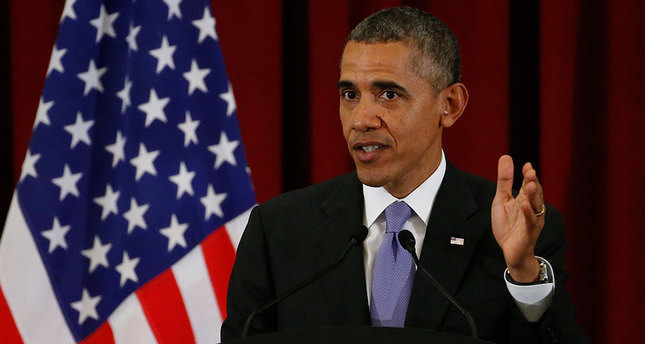 by Associated Press
Jun 27, 2014 12:00 am
President Barack Obama is seeking to bolster U.S. efforts to train and arm select members of the Syrian opposition, a move that comes amid increased U.S. concern that the conflicts in Syria and Iraq are becoming an intertwined fight against the same Sunni extremist group.

Obama sent Congress a $500 million request Thursday for a Pentagon-run program that would significantly expand previous covert efforts to arm rebels fighting both the Sunni extremists and forces loyal to Syrian President Bashar Assad. If approved by lawmakers, the program would in effect open a second front in the fight against militants spilling over Syria's border and threatening to overwhelm neighboring Iraq.

Obama has long been reluctant to arm the Syrian opposition, in part because of concerns that weapons may fall into extremist hands. But administration officials say the U.S. has grown increasingly confident in recent months about its ability to distinguish the moderate rebels from the more extremist elements that include the al-Qaida-inspired Islamic State of Iraq and the Levant, which has stormed into Iraq and captured much of the northern part of the country.

The risk of U.S. weapons and ammunition falling into the wrong hands appears to have only heightened now that ISIL has strengthened. But Obama's request to Congress appeared to indicate that tackling the crumbling security situation in Syria and Iraq trumped those concerns.

White House spokeswoman Caitlin Hayden said the military assistance "marks another step toward helping the Syrian people defend themselves against regime attacks, push back against the growing number of extremists like ISIL who find safe haven in the chaos, and take their future into their own hands by enhancing security and stability at local levels."

The Syria program is part of a broader, $65.8 billion overseas operations request that the administration sent to Capitol Hill on Thursday. The package includes $1 billion to help stabilize nations bordering Syria that are struggling with the effects of the civil war. It also formalizes a request for a previously announced $1 billion to strengthen the U.S. military presence in Central and Eastern Europe amid Russia's threatening moves in Ukraine.

The president's cautious approach to Syria has come under increased criticism as the civil war, now in its fourth year, spills across the border into Iraq, with Obama opponents arguing that the president's reluctance to arm the rebels gave ISIL the space to grow stronger.

Like the more moderate Syrian rebels, ISIL is seeking to push Assad from power. The group seeks to carve out a purist Islamic enclave across both sides of the Syria-Iraq border.

With ISIL gaining strength, U.S. officials say Assad's forces launched airstrikes on extremist targets inside Iraq on Monday. The U.S. is also weighing targeted strikes against ISIL in Iraq, creating an odd alignment with one of Washington's biggest foes.

Obama has ruled out sending U.S. troops back into combat in Iraq. But he has dispatched nearly 600 U.S. forces in and around Iraq to train local forces and secure the American Embassy in Baghdad and other U.S. interests.

The White House has been hinting for weeks that Obama was preparing to step up assistance to the Syrian rebels. In a commencement speech at West Point on May 28, he said that by helping those fighting for a free Syria, "we also push back against the growing number of extremists who find safe haven in the chaos."

Officials said the administration would coordinate with Congress and regional players on the specific types of training and assistance the U.S. would provide the opposition. One potential option would be to base U.S. personnel in Jordan and conduct the training there.

The Senate Armed Services Committee already has approved a version of the sweeping defense policy bill authorizing the Defense Department to provide "equipment, supplies, training and defense services" to elements of the Syrian opposition that have been screened. The Senate could act on the bill before its August recess.

In addition to the covert train-and-equip mission, the U.S. also has provided nearly $287 million in nonlethal assistance to the moderate opposition.

The military program would be supplemented by $1 billion in assistance to Syria's neighbors Jordan, Lebanon, Turkey and Iraq to help them deal with an influx of refugees and the threat of extremists spilling over their borders.

The instability in Iraq comes as Obama continues to grapple with a crisis in Ukraine, with Russia widely believed to be backing pro-Moscow insurgents in eastern Ukrainian cities. Russia's threats have stoked anxiety among U.S. allies in the region, who are seeking deeper military assistance from the U.S.

The overseas contingency request includes a $1 billion program that would increase the U.S. military presence in Central and Eastern Europe, boost training exercises with allies and allow the Pentagon to position equipment in the region. Obama announced the program during a trip to Poland this month.