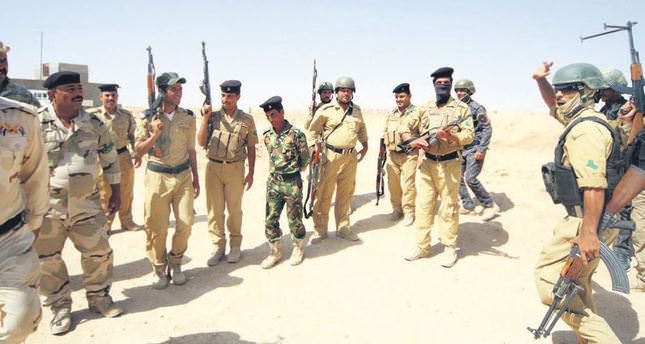 by Daily Sabah Jun 30, 2014 12:00 am
Forces loyal to PM Nouri al-Maliki are using Su-25 aircrafts purchased from Russia, in a deal believed to be worth $500 million, against ISIS, which has killed hundreds of soldiers and close to 1,000 civilians in the past month.

After Russia delivered five Sukhoi warplanes to Iraq to aid in the battle with the Islamic State of Iraq and al-Sham (ISIS), government planes pounded the northern city of Tikrit with air strikes which led to fierce clashes breaking out across the city yesterday, according to reports. Iraqi forces' latest military operation to regain control of the city of Tikrit shows that the Iraqi army has carried out "the most ambitious" operation since violent fighting broke out earlier this month. The city of Tikrit was captured by militants on June 11 after they seized control of large parts of Northern Iraq. "The first batch of Sukhoi Su-25 jets has arrived in Iraqi territory, which will enhance the combat capability of the Iraqi Air Force in eliminating terrorism," said the Defense Ministry, according to DPA reports.

The Iraqi military campaign to wrest back Tikrit began on Saturday with a multi-pronged assault spearheaded by ground troops backed by tanks and helicopters. After weeks of demoralizing defeats, Iraqi government forces have been able to make progress in Tikrit, the hometown of Saddam Hussein. While government troops were pushing deeper into the city of Tikrit, "security forces were able today to tighten their hold on most parts of Tikrit," said an unnamed security official according to alsumaria televison's news website.

While the fierce clashes have continued, the security spokesmen of the beleaguered Prime Minister Nouri al-Maliki stressed the importance of a political solution to end the ongoing crisis, stating that the government forces' operation in Tikrit "could be crucial not only tactically, but also for morale in the security forces."

In addition to the arrival of Russian jets, an Iranian general also announced that Iran would help Iraqi forces in their battle with ISIS militants by "using the same methods it deployed against opposition forces in Syria," suggesting that Tehran is ready to provide support in battling ISIS militias threatening the Shiite-led government.

Iran's Supreme Leader, Ayatollah Ali Khamanei said on June 22 that he rejected any intervention by outside powers against ISIS insurgents. The spiritual leader of Iraq's Shiite majority Ayatollah Ali al-Sistani also criticized earlier Shiite-led government policies and held Shiite leader Maliki responsible for the ongoing crisis and called for forming an "effective government" to resolve the crisis through dialogue. "It is necessary for the winning political blocs to start a dialogue that yields an effective government which enjoys broad national support, avoids past mistakes and opens new horizons toward a better future for all Iraqis," said al-Sistanti.

While ISIS fighters have made major gains, capturing major towns of the country, Iranian President Hassan Rouhani had stated that Tehran would defend Shia holy shrines in Iraq against possible ISIS attacks. Iranian security sources had announced earlier that Iranian Revolutionary Guard forces helped Iraqi security forces to retake some of Northern Iraq's key cities. As many believe the latest attacks would prove to be rapidly turning into a sectarian war across the Middle East.

Rouhani pledged support earlier this month to the Iraqi government in confronting the challenge of ISIS. Iran has also opposed any possible foreign military intervention for or against the Shite-led Iraqi government, asserting that Baghdad with considerable military support will be able to repel militants' attacks that endanger the Iraqi national unity.

The threat of Sunni militants overtaking Shiite-dominated Iraq has prompted Iran to deploy its military to aid its Arab ally in its battle against Sunni insurgents. According to security sources, two of the three battalions of the Quds Forces were deployed from Iran's western border province with the task of protecting Baghdad. One guard unit was said to fight alongside the Iraqi army offering military assistance.

Al-Qaeda-inspired fighters have been driving government security forces out of some of Northern Iraq's key cities since they launched their offensive this month. Iran, Maliki's close ally, has warned the militants are a significant strategic threat in the region.
RELATED TOPICS