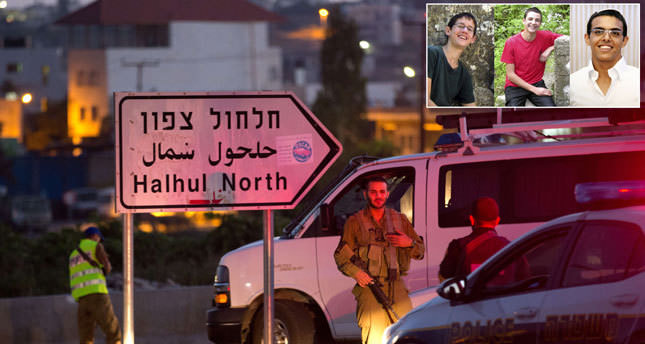 by Jun 30, 2014 12:00 am
The bodies of three Israeli teens who went missing in the West Bank have been found north of the city of Hebron, Israel's Channel 2 reported Monday.

A witness, Binyamin Profer, an Israeli volunteer who took part in the searches, told the channel a team member saw something suspicious in a field, somewhat covered up, under stones and a carpet.

It is believed they were shot shortly after they were taken from a hitchhike stop near a settlement bloc north of Hebron on May 12.

Israel had accused members of the Hamas movement in the West Bank of abducting the teens and responded with the largest-scale arrest raids in years.

The abductions sparked a flare in violence in the Gaza Strip with armed groups saying they would not remain silent in the face of Israel's actions in the West Bank and stepping up rocket attacks, to which Israel retaliated with airstrikes.

Earlier Monday, Gaza Strip militants launched at least 14 rockets at southern Israel Monday after a Hamas fighter was killed in an Israeli airstrike the previous night.

The fatality was a member of the Qassam Brigades, Hamas' armed wing, Hamas said in a statement.

The Israeli ynet news website said without reporting a source that Hamas fired Monday morning's volleys, engaging in rocket fire for the first time in 19 months.

Gaza had refrained from firing rockets at Israel since November 2012 when an Egyptian-brokered truce ended eights days of heavy fighting between Hamas and Israel.

Hamas, however, did not immediately issue a claim of responsibility.

"If the calm reached as a result of Operation Pillars of Defence [Israel's 2012 Gaza offensive] is violated, there will be two options: Either Hamas will stop it, or we will stop it," Netanyahu told a parliamentary committee.

Thus far, smaller groups, including the Islamic Jihad and the Popular Resistance Committees, as well as fighters identifying with al-Qaeda have launched most of the rockets.

More than 40 rockets have landed on the Israeli side of the border since three Israeli teenagers disappeared May 12 from a West Bank junction.