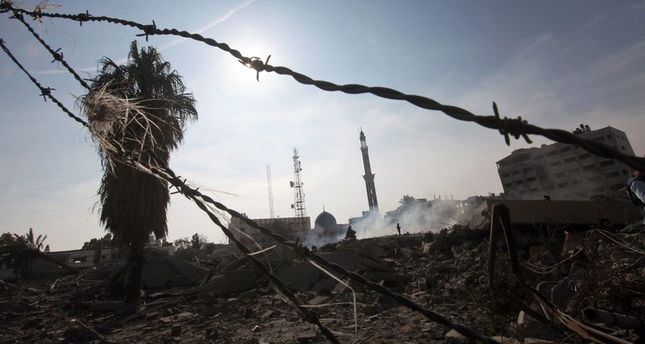 by AA
Jun 30, 2014 12:00 am
A Palestinian was killed and three others were injured on Sunday night when Israeli fighter jets targeted a group of Palestinians in southern Gaza Strip, eyewitnesses said.

According to the witnesses, an Israeli aircraft struck a gathering of Palestinians in Al-Qararah town on the outskirts of Khan Younis.
Gaza Health Ministry spokesman Ashraf al-Qodrah told Anadolu Agency that the airstrike left a Palestinian dead and three others with injuries ranging from moderate to serious.

The injured trio were transferred to Nasser medical complex in Khan Younis for treatment, he added.
The airstrike came shortly after the Israeli army said that its Iron Dome anti-rocket defense system had intercepted two rockets fired from the Gaza Strip over the southern city of Netivot.

Earlier Sunday, the Israeli army said more than 60 rockets have been fired on Israel from the Gaza Strip since the beginning of June.
Israel launched several strikes against targets inside the Gaza Strip early on Sunday in reaction to what it called a surge in rocket attacks. The raids left one Palestinian wounded.

Israeli Foreign Minister Avigdor Lieberman was quoted by Israel Radio on Sunday as calling on his government to consider the reoccupation of Gaza.