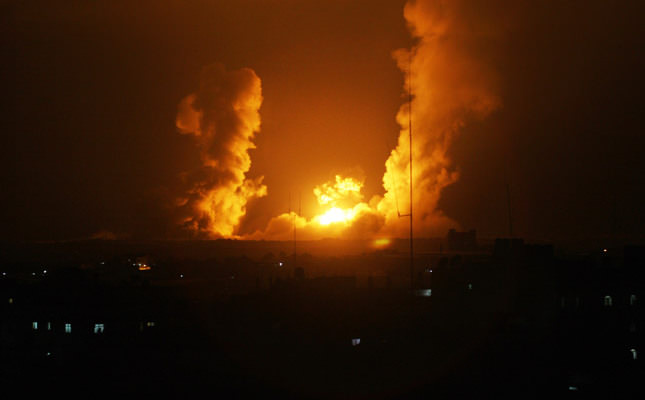 by Daily Sabah Jul 01, 2014 12:00 am
Following the discovery of the bodies of three Israeli teenagers in the southern West Bank on Monday evening, tensions have risen between the Israeli military and the Palestinian group Hamas. Israel holds Hamas responsible for kidnapping and killing three teenagers and in a show of force Israeli warplanes pounded the Hamas-controlled Gaza strip after the discovery of the teens' bodies, hitting 34 targets across the enclave, the Israel military said, according to AFP. "Hamas is responsible for the kidnapping and murder of the youths and we know how to settle accounts with them," said Israeli Defense Minister Moshe Yaalon, vowing to find those behind the killings. "We will continue to hunt the killers of the youngsters, we will not rest nor will we be silent until we lay our hands on them," he added.

In response to Israel's claim over the killings of three teenagers, Hamas spokesman Sami Abu Zuhri rejected the accusation while warning Israel against launching a broad offensive targeting the Palestinian group, saying it could lead to a wider conflict.

In a separate development, a Palestinian from the militant group Hamas was shot dead while Israeli military forces carried out an arrest raid in the West Bank, Israel's military said yesterday, according to AP.

Up to six Palestinians were killed during heavy airstrikes in the Gaza strip carried out by the Israel military since the Israeli teens were reported to be kidnapped, local residents said.

Eyal Yifrah, 19, Gilad Shaar, 16, and Naftali Fraenkel, a 16-year-old with dual Israeli-American citizenship, went missing on June 12 near the West Bank city of Hebron. After 18 days of intense search, the teens' bodies were found on Monday evening.

Regarding the increasing tension and an outpouring of Israeli public anger, the United Nations Human Rights office urged yesterday that all Israelis and Palestinians to exercise "maximum restraint." "We urge all parties to refrain from punishing individuals for offenses they have not personally committed or by imposing collective penalties," U.N. human rights spokeswoman Ravina Shamdasani said in a press statement in Geneva, according to Reuters. U.S. President Barack Obama also called on both parties not to take action, saying "I also urge all parties to refrain from steps that could further destabilize the situation."

A statement released yesterday by the office of U.N. Secretary-General Ban Kimoon also urged restraint. "[The secretarygeneral] calls on all parties to abide by their obligations under international law and to refrain from any actions that could further escalate this highly tense situation."
Last Update: Jul 01, 2014 11:33 pm
RELATED TOPICS