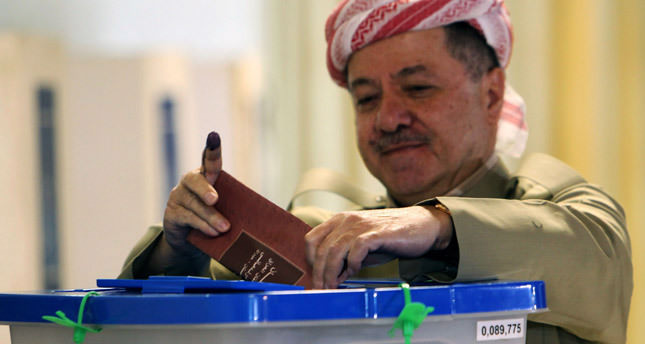 by Jul 03, 2014 12:00 am
Massoud Barzani, the leader of Iraq's Kurds set the ball rolling Thursday for a referendum on their long-held dream of independence, another setback for international efforts to unite the country's politicians against a militant offensive.

Meanwhile, Prime Minister Nouri al-Maliki broadened an amnesty offer aimed at undercutting support for insurgents, whose onslaught has have overrun areas of the country and who proclaimed a caliphate straddling Iraq and Syria.

Barzani told the autonomous Kurdish region's parliament that it should make "preparations to begin to organise a referendum on the right of self-determination."

"It will strengthen our position and will be a powerful weapon in our hands," he said.

The prospect of an independent state is made more attractive by what the Kurds say is Baghdad's unwillingness to resolve the issue of disputed territory and its late and insufficient budget payments to the region this year.

Barzani said Kurdish forces will not withdraw from the northern territory they occupied after federal security forces withdrew at the beginning of the offensive, giving them control of areas they want to absorb over Baghdad's strong objections.

Maliki rejected that Wednesday, saying "no one has the right to exploit the events that took place to impose a fait accompli" and that the Kurds' steps toward self-determination had no constitutional grounding.

On the ground, Iraqi forces were struggling to break a stalemate with militants. After wilting in the initial onslaught, they have since performed better but with limited offensive success.

A police lieutenant colonel said security forces clashed Thursday with militants near Tikrit, the northern hometown of Saddam Hussein they have been unsuccessfully fighting to retake for more than a week.

Salaheddin provincial Governor Ahmed Abdullah Juburi said Wednesday security forces were "advancing slowly because all of the houses and burned vehicles [en route to Tikrit] have been rigged with explosives, and militants have deployed lots of roadside bombs and car bombs."

It would be days before security forces could make a concerted push into the city, the capital of Salaheddin province, he said.

West of the city, meanwhile, a roadside bomb killed one Kurdish peshmerga fighter Thursday and wounded four others.

The cost of the conflict has been high for Iraq's forces. Nearly 900 security personnel were among 2,400 people killed in June, the highest figure in years, according to the United Nations.

The White House said Biden and Nujaifi agreed on the importance of "moving expeditiously to form a new government capable of uniting the country."

Secretary of State John Kerry phoned Barzani, stressing the important role the Kurds could play in a new unity government in Baghdad. That is seen as vital to meeting the challenge of Islamic State (IS) insurgents, who have led the militant offensive.

On Tuesday, Iraq's Council of Representatives met for the first time since its election in May, but parliamentarians failed to elect a speaker, with some trading threats and others walking out.

Diplomats urged the fractious parliament to set differences aside to face what has been described as an existential crisis for the country and press on with a much-delayed political process.

The legislature is due to reconvene on Tuesday. If they agree on a speaker, they then have to select a president and a government.

Under a de facto agreement, Iraq's premier is a Shiite Arab, the speaker Sunni Arab and the president a Kurd.

He made the offer to "all tribes and all people who were involved in actions against the state" but who now "return to their senses," but excluded those involved in killings.

He later added former officers from Saddam's armed forces to the amnesty offer.