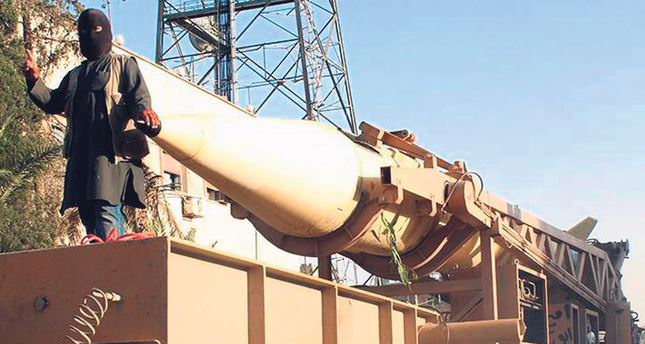 Radical Islamic State of Iraq and al-Sham (ISIS) militants paraded a scud missile around the town square of Raqqa, Syria, after declaring the establishment of the Islamic State, which stretches from northern Syria to the Iraqi province of Diyala, northeast of the capital Baghdad. The scud missile was photographed and tweeted by accounts linked to ISIS showing militants carrying ISIS flags as they celebrated the declaration of a caliphate.

Whether the scud missile displayed in the Syrian city of Raqqa poses a significant security threat raises concerns over ISIS power consolidating within the region.

U.S. counterterrorism officials told NBC News about the operational use of scud missiles, stating that ISIS militants could only use it as a propaganda tool. It is also stated that ISIS militants would "need maintenance personnel, fuel, a refueling vehicle and skilled operators," according to an official's statement on NBC News.

Meanwhile, following ISIS's call on all Muslims to pledge alliance to their front man and leader, Abu Bakr al-Baghdadi, the group issued a call to holy war in an online audio clip posted on Tuesday, in order to spread ISIS authority "from the Central African Republic to Myanmar." "By Allah, we will take revenge, by Allah we will take revenge, even if after a while,"

Baghdadi said in the video. "They have a statement that will cause the world to hear and understand the meaning of terrorism, and boots that will trample the idol of nationalism, destroy the idol of democracy and uncover its deviant nature," he added.

All these developments proved that ISIS militants are seeking to assert their authority over control of the global jihadist movement and would become a significant threat deteriorating regional and global peace and stability.

In their effort to consolidate power over the Muslim world, the radical militant groups in northern Syria reportedly declared that they would support insurgents in Iraq, while swearing an oath of allegiance to ISIS.

As radical militants monopolize their control over the territories stretching from northern Syria to northern Iraq, rebel groups located in northern and eastern Syria released a statement yesterday stating they are in dire need of "aid from the country's exiled opposition to allow them to fight against the insurgents." "We, the leaders of the brigades and battalions... give the National Coalition, the [opposition] interim government, the [rebel] Supreme Military Council and all the leading bodies of the Syrian revolution a week to send reinforcements and complete aid," said the statement, according to AFP, adding, "Should our call not be heard, we will lay down our weapons and pull out our fighters." "Our popular revolution [against Syrian President Bashar Assad]... is today under threat because of the [Islamic State], especially after it announced a caliphate," the statement also said.

In addition, regarding the declaration of a "caliphate" by ISIS militants in Iraq and Syria, a Jordanian jihadist ideologue and al-Qaeda cleric denounced the ISIS declaration of an Islamic state, stating that the security threat posed by ISIS has led to more bloodshed over the region. "Can every Muslim and weak person find refuge in this caliphate? Or would it be like a sharp sword against all opponents?" Issam Barqawi, known as Abu Mohammed al-Maqdessi, wrote on social media tools, according to AFP.

With regard to the ISIS declaration of a caliphate, the Iraqi Prime Minister Nouri al-Maliki underscored the threat of such a declaration by ISIS. "The caliphate is a message to the region's countries that they have entered the red circle ," Maliki said yesterday, according to independent news site Alsumaria News.

After the alarming effect of the ISIS declaration of a caliphate, the new Iraqi parliament ended its first session in disarray on Tuesday after failing to agree on potential candidates for the parliamentary speaker position, in an attempt to name a unity government which would expectedly help the country to oust ISIS militants and thus restore peace and stability to the country. The Iraqi parliament is expected to hold a second session in order to establish a more centralized and powerful parliament against the ISIS threat and the country's possible provincial fracturing.
RELATED TOPICS