Family of slain Palestinian teenager says might not take the body 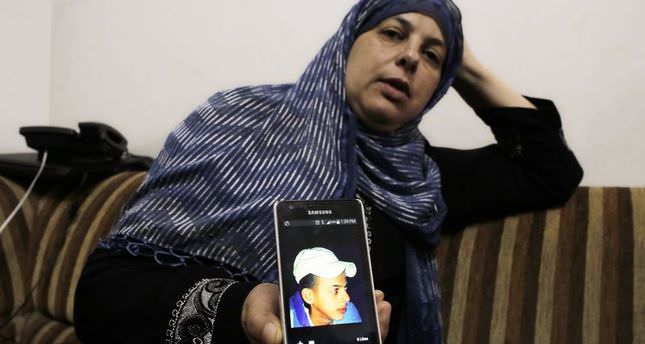 by AA Jul 04, 2014 12:00 am
The family of a slain Palestinian teenager found dead on Wednesday after being kidnapped by suspected Jewish settlers has said they may not take the body from Israeli police for burial if the latter linked the boy's death to an inter-family feud.

"Police told the father that they would hand over his son's body today [Thursday] once investigations were concluded," Ishak Abu Khdeer, uncle of slain teen Mohamed Hussein Abu Khdeer, told a press conference outside the family home near Jerusalem.

The boy's uncle said the family was expecting a call from police asking them to take the body for burial.

But the family, he said, "will refuse to take their son's body unless the police report clearly states that the killing was a political, not family, issue."

"If the family accepts taking the body under these [Israel's] terms, it could mean confirmation of Israeli claims that the killing was the result of an internal family problem," he added.

Family sources told Anadolu Agency that Israeli police had given the slain boy's father the names of relatives suspected of involvement in the 16-year-old's abduction and death.

The family is currently preparing to receive condolences from mourners at a tent set up outside their home.

On Wednesday, Abu Khdeer's charred body was found in a forest near Jerusalem in a suspected "revenge" attack by Jewish settlers for the recent killing of three Israeli teenagers who went missing from a West Bank settlement.

Footage taken from a security camera near Abu Khdeer's Jerusalem home showed what appeared to be Jewish settlers abducting the boy. In the footage, the kidnappers can be seen forcing him into their car before speeding off.