Palestinian fury at Israel boils at funeral for slain youth 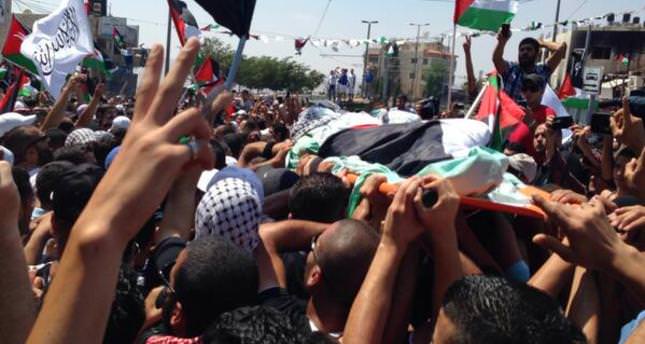 by Jul 04, 2014 12:00 am
Palestinians infuriated at a kidnap and killing they blame on far-right Jews clashed with Israeli police in Jerusalem on Friday, while cross-border shelling in the Gaza Strip abated under Egyptian mediation.

"With our souls and our blood we will redeem you, martyr," chanted hundreds of mourners who gathered for the funeral of 16-year-old Mohammed Abu Khudair after prayers marking the Muslim fasting month of Ramadan.

His body was carried for burial through east Jerusalem wrapped in a Palestinian flag. Elsewhere in the city Palestinians threw rocks at police who fired back tear gas and stun grenades. There was no immediate word of casualties or arrests.

Three Israeli teenagers were abducted on June 12, triggering army sweeps of the occupied West Bank. Hostility boiled over this week with the discovery of their bodies and with Abu Khudair's slaying in what many Palestinians believe was revenge.

Short-range rocket salvoes from Gaza have drawn Israeli air strikes and a mobilisation of ground forces which Prime Minister Benjamin Netanyahu on Thursday threatened to use unless the enclave's dominant Hamas Islamists held fire.

Israel said three rockets and two mortar bombs were fired across the border from Gaza on Friday. Its Iron Dome interceptor shot down one rocket and the other projectiles struck open ground. Israeli army artillery then shelled southern Gaza. No one was hurt on either side, Israeli authorities said.

Hamas, whose armed cadres Israel accuses of carrying out some of the rocket launches this week, said it was in contact with Egyptian mediators trying to prevent further flare-ups.

"Hamas stressed that it was not interested in a confrontation and the occupation (Israel) was responsible for the escalation against our people and they have to stop it," Hamas spokesman Sami Abu Zuhri said.

Ahead of Abu Khudair's funeral, Israeli police deployed extra forces in Jerusalem and barred men under the age of 50 from al Aqsa mosque complex, the city's most sacred Muslim site.