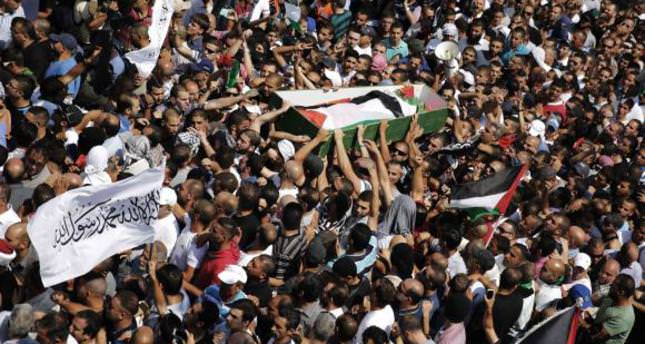 by Jul 05, 2014 12:00 am
Initial autopsy findings from the body of an East Jerusalem youth who is believed to be kidnapped and killed by far-right Jews showed that he was burned alive, the Palestinian attorney-general is reported as saying.

"The direct cause of death was burns as a result of fire and it's complications," Mohammed Al-A'wewy was quoted as saying by Palestinian official news agency Wafa late on Friday.

Israeli-Palestinian tensions have risen sharply after three Israeli teens were kidnapped on June 12 and later found dead in the occupied West Bank.

This was followed on Wednesday by the kidnapping of Mohammed Abu Khudair, 16, in his neighborhood in Arab East Jerusalem. His charred body was found hours later in a forest on the edge of the city.

Saber Al-Aloul, the director of the Palestinian forensic institute, attended the autopsy which was carried out by Israeli doctors in Tel Aviv.

Al-A'wewy said Al-Aloul had reported fire dust material was found in Khudair's respiratory canal which meant "the boy had inhaled this material while he was burnt alive."

Burns covered 90 percent of the surface of the body. The head suffered a cut. Samples like liquids and tissues were taken for more lab examinations to complete the legal medical report.

At Khudair's funeral on Friday, furious Palestinians chanted "Intifada! Intifada", calling for a new uprising against Israel. Stones thrown at Israeli police were met by teargas, stun grenades and rubber bullets in one of the most highly charged displays of enmity in Jerusalem in years.

Clashes continued across the occupied West Bank overnight with at least one Palestinian hurt in the city of Nablus, medical staff said. Clashes also erupted in Israeli-Arab towns, a police spokeswoman said.

Palestinian officials trying to calm tensions have said they would prevent any intifada, or uprising, and seek a solution to the crisis that began when the three Israeli teens were kidnapped.

The discovery of the young Israelis' bodies on Monday prompted an outpouring of national grief in Israel.

Many Palestinians, including President Mahmoud Abbas, assert that Khudair was the victim of far-right Jews incensed at the Israeli deaths.

With Israel having mobilised ground forces outside Gaza on Thursday in a threat to invade, Egypt tried to mediate a truce. Israel and the Palestinian Hamas movement each said the other had to back down first.

Israeli authorities said they did not yet know whether Abu Khudair was indeed the victim of a hate crime.