ISIS militants destroy many tombs and mosques in Iraq 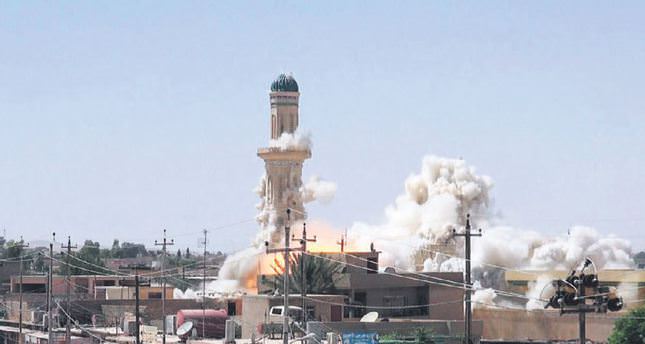 ISIS militants are destroying Islamic shrines and mosques, irrespective of their denomination, in Iraq's Nineveh province

Islamic State of Iraq and al-Sham (ISIS) militants who overran Mosul last month have demolished ancient tombs and mosques in and around the historic northern Iraqi city, residents and social media posts reported Saturday. At least four tombs to Sunni Arab or Sufi figures have been demolished by ISIS militants, while six Shiite mosques (Husseiniyahs) have also been destroyed across militant-held parts of northern Nineveh province, of which Mosul is the capital.

Pictures posted on the Internet by ISIS showed the Sunni and Sufi shrines were demolished by bulldozers, while the Shiite mosques and shrines were all destroyed by explosives. The photographs were part of an online statement titled "Demolishing shrines and idols in the state of Nineveh."

Local residents confirmed that the buildings had been destroyed and that militants had occupied two cathedrals as well. "We feel very sad for the demolition of these shrines, which we inherited from our fathers and grandfathers," said Ahmed, a 51-year-old resident of Mosul. "They are landmarks in the city."

An employee at Mosul's Chaldean cathedral said militants had occupied both it and the Syrian Orthodox cathedral in the city after finding them empty. They removed the crosses at the front of the buildings and replaced them with the Islamic State's black flag, the employee said.

ISIS-led militants overran Mosul last month and swiftly took control of much of the rest of Nineveh, as well as parts of four other provinces north and west of Baghdad, in an offensive that has displaced hundreds of thousands of residents and alarmed the international community.

The city, home to 2 million residents before the offensive, was a Middle East trading hub for centuries, its name translates loosely as "the junction."
Having been more recently populated mostly by Sunni Arabs, Mosul and Nineveh were also home to many Shiite Arabs as well as ethnic and religious minorities such as Kurds, Turkmens, Yazidis and other sects.

Meanwhile, a man purporting to be the leader of ISIS, which has declared an Islamic state in the territory it controls in Iraq and Syria, has made what would be his first public appearance, delivering a sermon at a mosque in Iraq's second-largest city, according to a video posted online Saturday.

The 21-minute video that is said to show Abu Bakr al-Baghdadi, the head of ISIS, was reportedly filmed on Friday at the Great Mosque in the northern city of Mosul. It was released on at least two websites known to be used by the organization and bore the logo of its media arm, but it was not possible to independently verify whether the person shown was indeed al-Baghdadi.

There are only a few known photographs of al-Baghdadi, an ambitious Iraqi militant believed to be in his early 40s with a $10 million (TL 21.3 million) U.S. bounty on his head. Since taking the reins of the group in 2010, he has transformed it from a local branch of al-Qaida into an independent transnational military force, positioning himself as perhaps the pre-eminent figure in the global jihadi community.

Al-Baghdadi's purported appearance in Mosul, a city of some 2 million people that the militants seized last month, came five days after his group declared the establishment of an Islamic state, or caliphate, in the territories it has seized in Iraq and Syria. The group proclaimed al-Baghdadi the leader of its state and demanded that all Muslims pledge allegiance to him.

In the video, the man said to be al-Baghdadi says that "the mujahedeen have been rewarded victory by God after years of jihad, and they were able to achieve their aim and hurried to announce the caliphate and choose the Imam," referring to the leader. "It is a burden to accept this responsibility to be in charge of you," he added. "I am not better than you or more virtuous than you. If you see me on the right path, help me. If you see me on the wrong path, advise me and halt me. And obey me as far as I obey God."

Speaking in classical Arabic with little emotion, he outlines a vision that emphasizes holy war, the implementation of a strict interpretation of Islamic law. He is dressed in black robes and a black turban a sign that he claims descent from the Prophet Muhammad. He has dark eyes, thick eyebrows and a full black beard with streaks of gray on the sides.

Aymenn al-Tamimi, an expert on militant factions in Syria and Iraq, said al-Baghdadi has come under some criticism since unilaterally declaring the establishment of a caliphate, in part for not appearing before the people. "He had declared himself caliph, he couldn't hide away. He had to make an appearance at some time," al-Tamimi said. Traditionally, a Muslim ruler is expected to live among the people, and to preach the sermon before communal Friday prayers.

A senior Iraqi intelligence official said that after an initial analysis the man in the video is believed to indeed be al-Baghdadi. The official said the arrival of a large convoy in Mosul around midday Friday coincided with the blocking of cellular networks in the area. He says the cellular signal returned after the convoy departed.
Last Update: Jul 06, 2014 11:44 pm
RELATED TOPICS