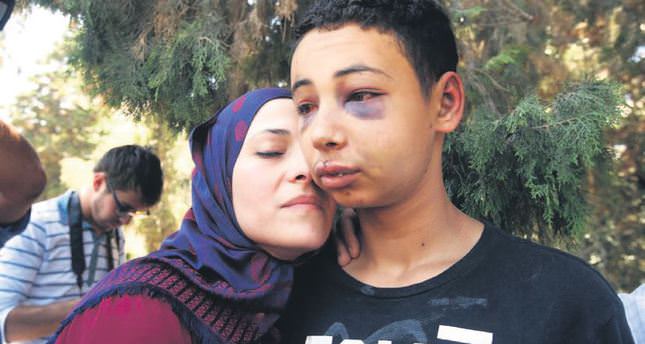 by Anadolu Agency Jul 06, 2014 12:00 am
An Israeli judge yesterday released from jail and placed under house arrest a 15-year-old American of Palestinian descent whose apparent beating by Israeli police in East Jerusalem has drawn U.S. concern. Tariq Khdeir from Tampa, Florida, is a cousin of Mohammed Abu Khdeir, 16, whose abduction and killing on Wednesday sparked violent protests and calls from Palestinians for a new uprising against Israel. Many Palestinians, including President Mahmoud Abbas, say the teen was the victim of right-wing Jews avenging the abduction and killing of three Israeli teenagers, whose bodies were found on Monday.

Meanwhile, State Department spokeswoman Jen Psaki confirmed the detention of the American citizen in a statement on Saturday. "We are profoundly troubled by reports that he was severely beaten while in police custody and strongly condemn any excessive use of force," Psaki said.

The video, broadcast by Palestinian and international media such as the Guardian, allegedly shows Tariq, 15, the cousin of Palestinian teenager Mohamed Abu Khdeir who was killed earlier this week, being beaten by Israeli police. "We are calling for a speedy, transparent and credible investigation and full accountability for any excessive use of force," added Jen Psaki.

The 16-year-old Palestinian Mohammed Abu Khdeir was burned alive by his kidnappers in a suspected revenge attack by Jewish settlers for the recent killing of three Israeli teenagers who had gone missing from a West Bank settlement in mid-June. Their bodies were found on Monday in the West Bank. "The autopsy showed that Abu Khdeir was alive and breathing while he was being burned," Attorney General Muhammad Abd al-Ghani told Anadolu Agency. The official autopsy report was released on Saturday.

Clashes broke out again in several parts of Jerusalem on Friday between Palestinian youths and Israeli forces following the funeral of the Palestinian teen. The U.S. reiterated their "grave concern about the increasing violent incidents in Jerusalem" and called "on all sides to take steps to restore calm and prevent harm to innocents."

Meanwhile, Israeli aircraft attacked 10 sites used by Palestinian militants in the Gaza Strip on Sunday in response to persistent rocket strikes from the enclave, the Israeli military said. Rocket launchers and a weapons manufacturing facility were among the targets of the air strikes, which followed the firing of a rocket, intercepted by Israel's Iron Dome system late on Saturday, at the major southern city of Beersheba. There were no immediate reports of casualties from the air strikes.
Last Update: Jul 06, 2014 11:54 pm
RELATED TOPICS