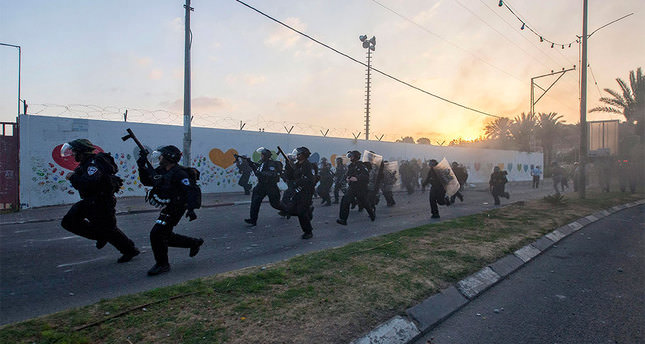 by AA Jul 06, 2014 12:00 am
Israel's police on Sunday deployed 10,000 soldiers in different cities against the background of rising tensions in Arab cities and towns in the self-proclaimed Jewish state.

Tel Aviv District Police Commander Aharon Aksol told Israel Radio that the deployment of the 10,000 soldiers was in anticipation of violence.

He said authorities were taking several measures to calm down tempers, either through police operations or dialogue with leaders of the Arab community.

Violent clashes had erupted between residents and Israeli soldiers in different Arab cities and continued into the early hours of Sunday.

Similar clashes were also reported in the neighborhoods of occupied East Jerusalem.

Israel's police had earlier warned Arabs against escalation, calling on Arab figures to intervene to calm down the demonstrators.

The confrontations were triggered by last week's abduction and killing of a 16-year-old Palestinian teen near Jerusalem by suspected Jewish settlers.