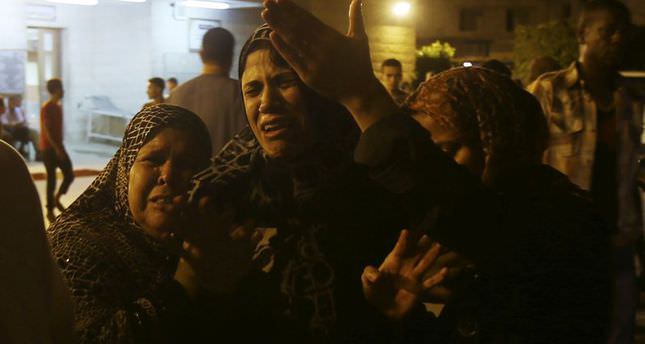 by Begüm Tunakan Jul 07, 2014 12:00 am
IsraelI airstrikes on various targets in the Gaza Strip killed at least nine people and are seen as a collective punishment of Palestinian civilians for the murder of three Israeli teenagers. Meanwhile, three of six detained Israelis have admitted to killing a 16-year-old Palestinian teenager in revenge.

While unrest spreads from East Jerusalem to several Arab-Israeli towns with the vigilant killing of Palestinian teenager Mohammed Abu Khdeir by three suspected Israelis last week, nine Palestinians were reportedly killed during heavy Israeli air raids on the Gaza strip. Palestinian officials confirmed the death of nine Palestinian militants Sunday overnight. Among the nine Palestinians militants, Hamas stated that six of them died during the airstrike near Rafah, a Palestinian city in the southern Gaza Strip.

Three other Palestinians died in separate air strikes near a refugee camp in central Gaza. "The enemy will pay a tremendous price," said Hamas, vowing to take revenge for the death of the Palestinian teen, according to AP. The increasing number of Palestinians killed during the heavy strikes incited violence among Gaza's armed groups leading to continuous rocket attacks on southern Israel, according to DPA.

Many Palestinians believe that the death of Abu Khdeir "was a revenge killing in response to the abductions and killings of the three Israeli teens."

"I would like to express my outrage and that of the citizens of Israel over the reprehensible murder of your son," said Israeli Prime Minister Benjamin Netanyahu, making a phone call to Hussein Abu Khdeer, father of murdered Palestinian teen Mohamed Abu Khdeir, according to Israeli daily Yediot Aharonot.

"We denounce all brutal behavior; the murder of your son is abhorrent and cannot be countenanced by any human being," said Prime Minister Netanyahu. "We acted immediately to apprehend the murderers. We will bring them to trial and they will be dealt with to the fullest extent of the law," he added.

Considering the escalating violence towards Palestinians, Palestinian Authority President Mahmoud Abbas called on the U.N. to condemn the continued Israeli violations against the Palestinian people.

"Abu Khdeir was burnt alive and 16 Palestinians, including children and women, were killed during the past two weeks, aside from the ongoing kidnapping attempts and assaults against [Palestinian] children," Abbas stated in his urgent letter to the U.N. Prof. Mustafa Sıtkı Bilgin from Yıldırım Beyazıt University spoke to Daily Sabah and criticized Israel's latest airstrikes on the Gaza Strip, saying "Israel's main strategy is to block Israel, peace talks [with the Palestinians] and the establishment of a Palestinian state." Regarding the many Palestinians who have been killed, injured or detained over the last three weeks, he said the flare-up violence and growing public anger of both sides "would only work for Israeli's government objectives over the territories."

"The ongoing regional chaos in the Middle East, especially in Syria and Iraq, has also benefited the Israeli government in order to attain its regional objective," he added. The Turkish Foreign Ministry, in a press release on July 3 regarding the killing of a Palestinian, also called for "all parties to act with moderation and common sense in this sensitive environment," stating that "necessary efforts should be exerted by all parties in order to reduce the increasing tensions in the region, especially in East Jerusalem, and the use of excessive force on security grounds as a collective punishment against the people of Palestine must stop immediately."

The Turkish Foreign Ministry also voiced its concern over a new spiral of violence set off by ongoing violence. Tensions have already risen in the warstricken Palestinian territories since three Israeli settlers went missing in early June. Following the discovery of the bodies of three Israeli teenagers in the southern West Bank on Monday evening, tension has increased between Israeli military and Palestinian group Hamas. Eyal Yifrah, 19, Gilad Shaar, 16, and Naftali Fraenkel, a 16-year-old with dual Israeli-American citizenship, were abducted on June 12 near the West Bank city of Hebron.

After 18 days of intense searching, the teens' bodies were found last week which resulted in a wider conflict between Israel and Hamas. Since then the tension in the region has escalated. Israel holds Hamas responsible for kidnapping and killing three teenagers. Israeli warplanes pounded the Hamas-controlled Gaza strip right after finding the teens' bodies, hitting 34 targets across the enclave.
Last Update: Jul 07, 2014 11:37 pm
RELATED TOPICS