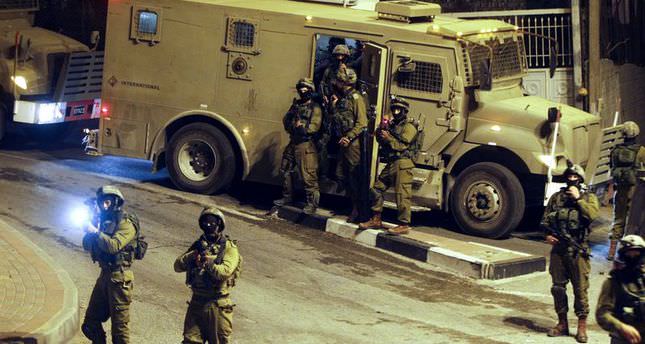 by AA Jul 07, 2014 12:00 am
The Israeli army has detained 60 Palestinians within the past two days from Arab towns in Israel, a Palestinian NGO announced on Sunday.

"Israel detained 60 Palestinians following confrontations that came after the killing of Mohamed Abu Khdeer," read a statement by the Palestinian Prisoners Society.

"Half of the detainees are minors and some of them were injured at the time of their arrest," the statement said.

Tension has soared in the region after the killing of 16-year-old Mohamed Abu Khdeer, who have been abducted and murdered by Jewish settlers near Jerusalem.

On-and-off confrontations have broken out in the Arab towns in Israel as well as the West Bank between angry Palestinians and Israeli forces following a massive funeral in East Jerusalem bidding farewell to Khdeer on Friday.

The family of Mohamed Abu Khdeer, 16, says Israeli settlers had abducted him from outside his home in East Jerusalem on Wednesday.

His charred body was found the same day in a forest near Jerusalem in a suspected "revenge" attack by Jewish settlers for the recent killing of three Israeli teenagers who went missing from a West Bank settlement.

Preliminary autopsy report showed that Abu Khdeer had been burnt alive by his kidnappers.

Footage taken from a security camera near his Jerusalem home showed what appeared to be Jewish settlers abducting the boy.

In the footage, the kidnappers can be seen forcing him into their car before speeding off.

Heightened tension has already pervaded the occupied territories after three Israeli settlers who went missing in June were found dead last week near the West Bank city of Hebron.

In the three weeks since the settlers' initial disappearance, Israel has rounded up hundreds of West Bank Palestinians, including lawmakers, former cabinet ministers and senior members of the Gaza-based Hamas movement – which Israel accuses of kidnapping and murdering the settlers.

No Palestinian group has claimed responsibility for the settlers' disappearance or subsequent death.