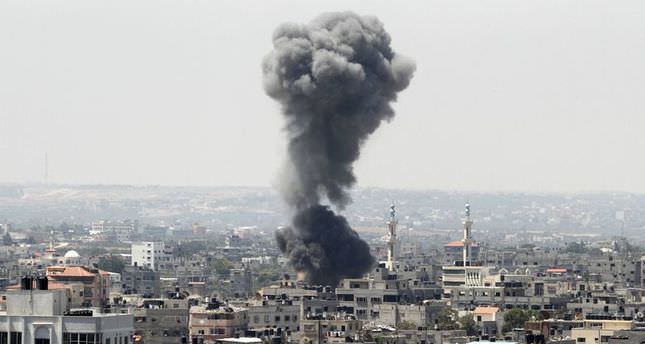 by AA Jul 08, 2014 12:00 am
Four Palestinians were killed on Tuesday in an Israeli airstrike that targeted their car in central Gaza City.

Eyewitnesses said the four bodies extracted from the destroyed car had been blown into pieces.

The identity of the four slain Palestinians remains unknown, while the Israeli army has yet to comment on the incident.

The Israeli army said Tuesday that its air and naval forces had struck 50 sites across the Gaza Strip overnight, while troops were being mobilized on the border with the Palestinian enclave for a possible ground operation.

On Tuesday, Israel announced the launch of a military offensive-"Operation Protective Edge"-with the stated aim of ending rocket fire from Gaza.

According to Israel, Gaza-based Palestinian groups have fired over 450 rockets into Israel since the beginning of the year.

The latest escalation comes amid tensions over the killing of three teenage Jewish settlers in the West Bank last month and the subsequent murder of a 16-year-old Palestinian in a suspected "revenge" attack by Jewish settlers.