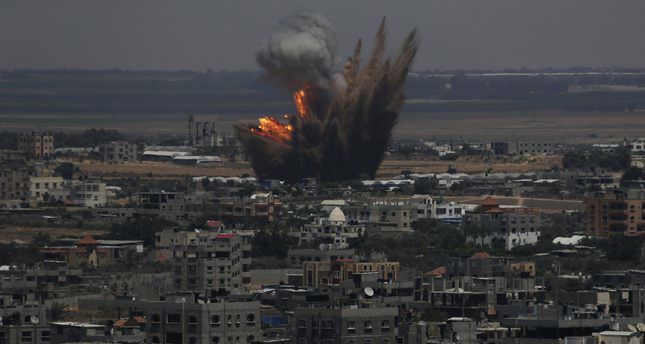 The Israeli military expanded its operations against Palestinian targets in the Gaza Strip, leaving many dead and injured in its wake

The Israeli Defense Force (IDF) announced yesterday the start of an extensive military campaign in response to Palestinian militants having fired dozens of rockets into Israeli territory. As part of an Israeli military campaign, ground troops were reportedly mobilized on the border of the Hamas-ruled Gaza Strip for a potential ground operation. The Israeli security cabinet has called up 40,000 reservists for possible Gaza ground operation.

Meanwhile, air and naval forces pounded 50 sites across the Gaza Strip early on Tuesday. Another air operation dubbed "Operation Protective Edge" has been confirmed by an Israeli army spokesman without giving any further detail about how the operation would work, according to Agence France-Presse (AFP) news agency. The IDF spokesperson announced the operation on twitter posting, "#Hamas will not be safe as long as it continues to threaten the lives of #Israeli civilians." "The air raids we have carried out are only one step. The operation is not limited in time," said an Israeli army spokesman. It is also reported that Israelis have sent reinforcements to be deployed near the Gaza Strip if necessary.

Israeli Prime Minister Benjamin Netanyahu held talks with security officers yesterday, ordering "a significant broadening of the [military] operation" and instructed the military to "take off the gloves," as AFP reported. "Hamas chose to escalate the situation and it will pay a heavy price for doing so," Netanyahu was quoted by the Jerusalem Post newspaper.

The latest reports show that Israeli fighter jets bombed a house in southern Gaza Strip, leaving at least seven people killed and 25 others injured. In a separate development, Four Palestinians were killed in an Israeli airstrike that targeted their car in central Gaza City.

Palestinian president Mahmud Abbas demanded Israel stop its latest offensive against Gaza while urging the international community "to immediately intervene to halt this dangerous escalation which would lead the region to more destruction and instability," according to a statement published by the official Palestinian WAFA news agency.

Considering the escalating tension, U.S. President Barack Obama stated in his piece published yesterday in the Israeli newspaper Haaretz, that the recent attacks would threaten U.S.-backed peace talks between Israelis and Palestinians. "All parties must protect the innocent and act with reasonableness and restraint, not vengeance and retribution," Obama wrote. "As I said last year in Jerusalem, peace is necessary, just, and possible. I believed it then. I believe it now … Peace is necessary because it's the only way to ensure a secure and democratic future for the Jewish state of Israel," Obama said, calling for restraint.

U.S. State Department spokeswoman Jen Psaki commented on June 7 about growing tensions and increasing violence saying, "It's difficult for us to see, given this current atmosphere, how other aspects of the reconciliation process could continue." "The Secretary [of State] … urged Prime Minister Netanyahu, as he's urged both parties, to exercise restraint and avoid steps that could further destabilize the situation," Psaki said in a daily press briefing.

In reaction to Israeli bombardment of dozens of targets in the Gaza Strip, France's foreign ministry commented yesterday on the escalating violence between Israeli troops and Palestinians in the Gaza Strip, calling all parties to ease the tensions. "We reaffirm our rejection of any form of violence and call on all parties to show restraint," French Foreign Ministry spokesman Romain Nadal said, according to Reuters.

As airstrikes by Israel have escalated in recent days, at least eight Palestinians, including a woman were reportedly injured in yesterday's Israeli airstrikes that pounded 50 sites across Gaza, Palestine Health Ministry spokesman Ashraf al-Qodra told AA. Among the sites targeted mostly in airstrikes by the Israeli military yesterday morning were "four houses belonging to activists, three militant compounds, 18 rocket launchers and other militant infrastructure sites," said an Israeli army spokesman. He also said that the military operations have aimed to "hit Hamas and reduce the number of rockets fired at Israel."

Following rocket fire from the enclave that pounded Israeli territories, Israeli airstrikes overnight on Monday reportedly left 22 Palestinian injured, including seven children and two women. Two of the injured remain in serious condition, witnesses and Palestinian security officials said yesterday.
Pointing to escalating tension between the two parties, the Israeli military announced that more than 40 rockets have been fired from the Hamas-ruled Gaza Strip within a short period of time, indicating that some of them hit inside Israeli territory and posing a security threat to civilians. "A barrage of over 40 rockets was launched from the Gaza Strip in the past hour. Seven rockets were intercepted over the city of Ashdod and five rockets were intercepted over Netivot," an Israeli army statement said Monday.

Tensions have escalated between the Israeli military and the Palestinian group Hamas over the discovery of the bodies of three Israeli teenagers in the southern West Bank and the subsequent murder of a Palestinian teenager by three to six suspected Jewish settlers.

After Israeli PM Netanyahu expressed his outrage over the murdered Palestinian teen, Mohammed Abu Khdeir, the outgoing Israeli President Simon Peres also condemned the killing saying, "To take a young boy, to kill him, to burn him - what for?" according to AFP.
RELATED TOPICS