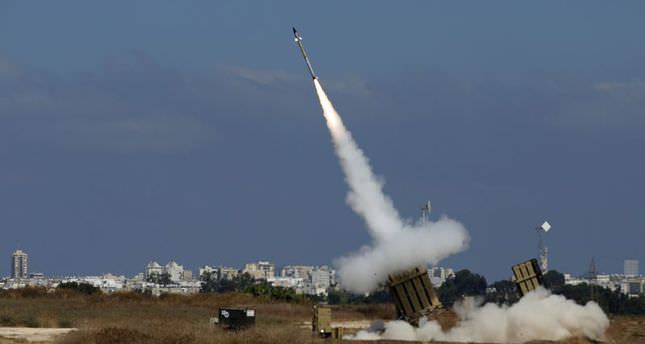 by AA Jul 09, 2014 12:00 am
The Israeli authorities opened public bomb shelters in Jerusalem and Dimona in the light of rocket fire coming out from the Gaza Strip.

"The Jerusalem Municipality is preparing for every possible scenario and has decided to open the public bomb shelters across the city over the next few hours," a statement by the Israeli authority said late Tuesday.

"A list of shelters are published on the municipality website. The municipality also recommends that residents open their private shelters," it added.
A similar move was announced by the municipalities of Dimona and Tel Aviv, Israeli media reported.

The move came after Ezzeddin al-Qassam Brigades, the military arm of Palestinian resistance group Hamas, said it had fired volleys of rockets on several Israeli cities, including Jerusalem, Haifa, Tel Aviv and Ashdod.

At least 24 Palestinians were killed in Israeli airstrikes on the coastal enclave since Israel announced the launch of a military offensive – dubbed "Operation Protective Edge" – with the stated aim of staunching rocket fire from Gaza.

The Israeli army said Tuesday that its air and naval forces had struck scores of sites across the Gaza Strip overnight, while ground troops were being amassed on the strip's borders in advance of a possible ground incursion. Gaza-based resistance factions, for their part, continued to fire rockets into Israel.

The latest escalations come amid heightened tension over the killing of three teenage Jewish settlers in the West Bank last month and the subsequent murder of a 16-year-old Palestinian boy by suspected Jewish settlers.