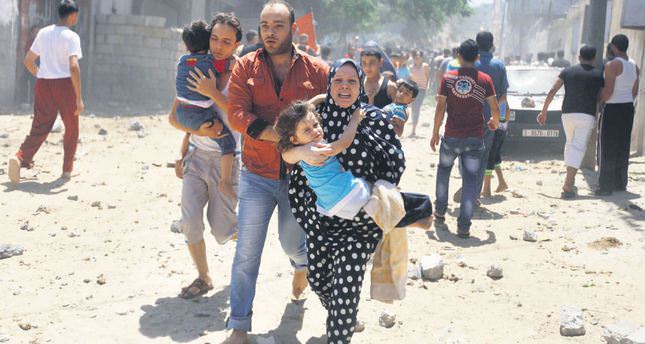 As Israel's attacks on the Gaza Strip broaden, Prime Minister Erdoğan declared that Turkey cannot remain silent on what's happening to civilians and called on the world to act

While Israel's military operation in the Gaza Strip continues, Turkey has intensified diplomatic efforts to stop the attacks, which have claimed at least 40 lives and injured as many as 300 by late Wednesday. Prime Minister and AK Party presidential candidate Recep Tayyip Erdoğan said yesterday, "No one can expect Turkey to remain silent when bombs are falling on innocent civilians" and called on the international community to act. The Foreign Ministry called on Israel Tuesday to halt its assault against the Gaza Strip and invited the U.N. to take action. "We are calling on Israel to immediately halt its attacks on Gaza," the Foreign Ministry said in a statement. Foreign Minister Ahmet Davutoğlu also held an unscheduled meeting with President Abdullah Gül to discuss the latest developments on Wednesday. Sources in Ankara stated that Israel's attacks have also put a strain on Turkey-Israel rapprochement efforts. A senior-level Prime Ministry official argued that the mending of ties with Israel and the Palestinian question are essentially two distinct topics on the government's agenda.

"The most recent developments, however, obviously have an influence on the progress of bilateral relations. We are unhappy with the current state of affairs with Israel, but as long as Israeli authorities approach the Palestinian question in this fashion, we could not normalize ties even if we wanted to. Lifting the siege on Gaza was one of the items in our normalization agreement, and Israel once again made clear that they have no respect for the process," the official noted.

Meanwhile, sources at the Ministry of Foreign Affairs reiterated that ongoing attacks on Gaza have put a strain on the normalization agreement.
Commenting on Israel's latest wave of military operations in the area, one Foreign Ministry official said, "Turkey simply cannot advocate such an agreement while people continue to die in Gaza. But the deal could come back to the table if the parties agree on a new ceasefire in Gaza and normalize their ties."

Turkish and Israeli officials started talks last year on compensation for families of victims of an Israeli raid on the Gazabound aid ship Mavi Marmara in May 2010, one of the Turkish conditions for restoring relations with Israel. The talks followed a U.S.-brokered telephone conversation between the Turkish and Israeli prime ministers in March 2013, during which Prime Minister Recep Tayyip Erdoğan accepted an Israeli apology for mistakes during the Mavi Marmara raid.

Turkey withdrew its ambassador from Israel and expelled the Israeli ambassador in Ankara after the Mavi Marmara raid, demanding a formal apology, compensation for families of the victims and the lifting of the Israeli blockade of Gaza to restore ties.

According to media reports, but not officially confirmed, the two sides have agreed that Israel will pay some $21 million (TL 44.65 million) to the families of the victims. This money will not be paid directly to the families, but rather deposited in a fund that will later be distributed among them. Once the deal is signed, the countries are expected to immediately exchange ambassadors.

Prime Minister Recep Tayyip Erdogan said in March he is prepared to normalize ties with Israel within days or weeks; however, Israeli media outlets have reported that the long-anticipated compensation agreement between Turkey and Israel has been delayed by the Israeli side due to internal dissent over the deal.
RELATED TOPICS