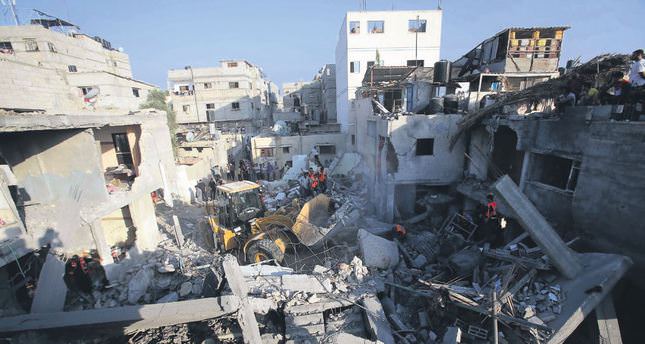 The Israeli military persistently strikes Hamas targets in the Gaza Strip, contributing to the rising Palestinian death toll which is up to 81 since the beginning of the large-scale operation, while deploying more troops for a potential ground offensive

The Israeli government has stepped up attacks in the Gaza Strip as the world community takes action to put an end to the assault that has killed at least 81 people, 23 of whom were children. Prime Minister Recep Tayyip Erdoğan yesterday spoke to Palestinian President Mahmoud Abbas and the head of Hamas' political bureau, Khaled Mashal, reiterating Turkey's condemnation of Israeli attacks.

During the conversations, Erdoğan called on Israel to immediately cease its assault. Meanwhile, Israel has deployed more troops for a potential ground incursion, seen by experts as a risky venture if initiated. The U.N. Security Council was scheduled to meet overnight on the issue, while huge crowds turned out in Europe and the U.S. to protest against Israeli raids. Japan and several other countries have also condemned escalating Israeli aggression toward the Gaza Strip. The escalating tension in the region is believed to have damaged efforts to mend ties between Israel and Turkey that collapsed after the 2010 Mavi Marmara attack that killed nine Turkish nationals.

While the persistent Israeli operations targeting more than 770 targets in the Gaza strip, including residential areas in the last 48 hours continue, Israeli military has announced the extension of military operations through the deployment of ground troop to Hamas-controlled Gaza strip for a possible ground assault. Meanwhile, the Palestinian death toll has risen to 81 since Israel launched the military offensive dubbed "Operation Protective Edge" early on Tuesday to stop crossborder rocket fire.

Ufuk Ulutaş, the Director of Foreign Policy Studies at the Foundation for Political, Economic and Social Research (SETA) said the possible Israeli ground invasion would pose a "higher risk" in an already unstable region as it would lead to deadlier attacks and more deaths on both sides leading to increasing aggression and anger. As ISIS militants in Syria and Iraq threaten regional peace and stability and draw more attention from the international community, Ulutaş stated that this would help facilitate Israel's military operations in Gaza. "There is a large mobilization of ground troops around Gaza, including infantry forces and tanks as well as combat engineering corps," Avichay Adraee, spokesman for the Israeli military to Arab media, told Anadolu Agency (AA) on the phone yesterday. "The troops are on full alert and will be ready to conduct a ground intervention order within hours of its issuance," said Adraee.

Lieutenant-Colonel Peter Lerner, an Israeli military spokesman, said that 20,000 reservists have been drafted on the Strip's border in advance of a possible ground assault.

Meanwhile, Turkish Prime Minister Recep Tayyip Erdoğan called for an urgent ceasefire and announced that humanitarian aid will be sent to the Gaza Strip. Erdoğan said he discussed the recent situation during a phone call with Khaled Mashal, the leader of the Hamas political bureau and Palestinian Authority President Mahmoud Abbas, and called on the international community to take action to halt Israeli aggression.
On the third day of the Gaza military campaign, Hamas has announced the conditions for a possible truce between the two sides in a recorded statement broadcasted on Hamas' al-Aqsa television, according to DPA news agency. In order to stop Gaza-launched rocket attacks against Israel, Hamas demands the release of 51 Palestinian militants freed in a 2011 prisoner swap for Gilad Shalit, along with stopping the arrests in the West Bank and Israel- led sabotage of the newly-formed Palestinian unity government. However, Israeli Prime Minister Benjamin Netanyahu stated earlier that Israeli attacks would be stopped only when "a complete cessation of Gaza-launched rocket attacks against Israel" occurred. Netanyahu said no Gaza truce is in Israel's agenda as Haaretz daily newspaper reports.

As the Israeli military has continued to pound the Palestinian territory with airstrikes and mobilize ground troops on the Strip's border, Erez border crossing was destroyed in an Israeli attack, said the Palestinian ministry. In addition, according to Thursday reports, five Palestinian children were among 25 people killed in Israeli air strikes on Gaza. In response to the unrelenting Israeli airstrikes, Gazabased Hamas resistance groups have continued to fire rockets into Israel. There have been no reported Israeli deaths so far.

Meanwhile, the Rafah border crossing with the Gaza Strip opened yesterday with the aim of transferring injured Palestinians to Egyptian hospitals for treatment, Egyptian authorities declared. The head of the Palestinian border authority, Maher Abu Saha told AA that Egypt would send humanitarian aid and medicine to the besieged Gaza strip. In addition, 15 Egyptian doctors reportedly traveled to Rafah yesterday morning to help wounded Palestinians. The Rafah crossing has been declared it will remain open for only three days.

The Turkish Foreign Ministry voiced its concern over a new spiral of violence while calling on "all parties in order to reduce the increasing tensions in the region… and the use of excessive force on security grounds."

Experts believed the recent Israeli attacks have a negative impact on already stricken Turkey-Israel relations. "Turkey is the only Muslim country reprimanding Israel over these deadly attacks [towards Palestinians]," said Prof. Dr. Mustafa Sıtkı Bilgin, a Middle East expert. Considering the possible effects of Israeli attacks on Israel-Turkey diplomacy, Ulutaş said this would "end all hopes for normalizing relations" between the two countries.

As the situation on the Strip's border deteriorates, the United Nations Secretary-General Ban Ki-moon called on the Security Council to convene over the ongoing crisis yesterday.

He gave a special briefing on the deteriorating situation in the Israeli-Palestinian conflict at the U.N. headquarters in New York, warning that a new wave of Israeli-Palestinian violence increases the risk of the conflict expanding "which could quickly get beyond anyone's control." "Gaza, and the region as a whole, cannot afford another full-blown war," said the U.N. chief, while urging the world leaders to call for restraint and the dire need of upholding a cease-fire for maintaining regional peace and stability.

Ban also stated that he urged the Egyptian president, the rulers of Qatar, Saudi Arabia and U.S. Secretary of State John Kerry in a phone call to press the Israelis and Palestinians to return to the cease-fire agreement and thereby resume peace talks. He also praised Palestinian Authority (PA) President Mahmoud Abbas for "courageously upholding his commitment to security coordination."

Tensions have escalated between the Israeli military and the Palestinian group Hamas over the discovery of the bodies of three Israeli teenagers in the southern West Bank and the subsequent murder of a Palestinian teenager by three to six suspected Jewish settlers.
Last Update: Jul 10, 2014 11:41 pm
RELATED TOPICS