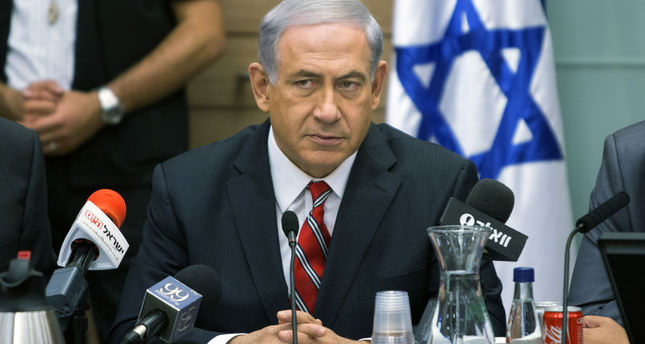 by AA Jul 10, 2014 12:00 am
Israeli Prime Minister Benjamin Netanyahu on Thursday told members of the Knesset's foreign affairs and defense committee that a ceasefire with Hamas was currently "not on the agenda," Israeli daily Haaretz has reported.

"I am not talking to anybody about a ceasefire right now; it's not even on the agenda," Netanyahu told the committee.

He made the statements during discussions with committee members on the objectives of Israel's ongoing campaign against the Gaza Strip, which started late Monday.

Israeli President Shimon Peres, for his part, voiced support for the ongoing offensive.

"We are prepared and ready for any scenario in order to protect our civilians. We will not consent to being victims," he said via Twitter. "Israel won't rely on luck."

Since late Monday, Israeli warplanes have pounded the Gaza Strip as part of a military offensive-dubbed "Operation Protective Edge"-with the stated aim of ending rocket fire from Gaza.

At least 81 Palestinians have been killed by Israel since the operation commenced, according to Palestinian medical sources.

The Israeli Army claimed earlier that Hamas had fired over 365 rockets at Israel from Gaza within less than three days.

No Israeli deaths have been reported thus far as a result of Palestinian rocket fire.