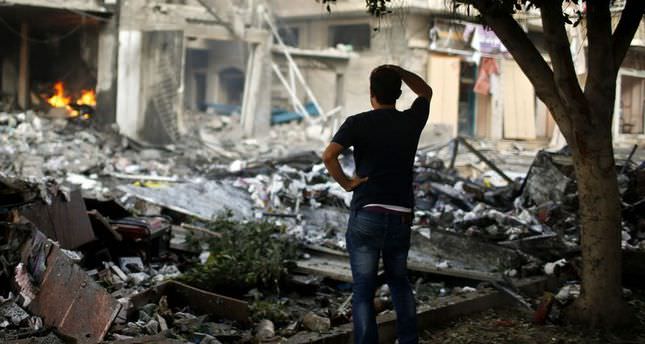 by AA Jul 11, 2014 12:00 am
An ongoing Israeli air offensive against the Gaza Strip has completely destroyed 282 homes in the embattled coastal enclave and partially damaged thousands of others, a Palestinian cabinet minister said Friday.

"Some 282 homes have been destroyed and 8910 others partially damaged by Israel's military operation in Gaza," Palestinian Public Works Minister Mufeed al-Hassayna said in a press release.

For the last four days, Israeli warplanes have pounded the Gaza Strip as part of a military offensive-dubbed "Operation Protective Edge"-with the stated aim of ending rocket fire from Gaza.

At least 100 Gazans, mostly civilians, have been killed and hundreds injured since the operation began Monday night, according to Palestinian medical sources.

Gaza-based resistance factions, meanwhile, have continued to fire rockets into Israel-where no fatalities have been reported thus far-in response to the unrelenting airstrikes.