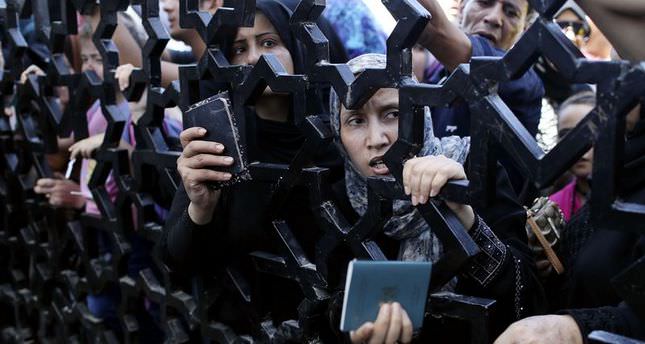 by AA Jul 11, 2014 12:00 am
Egyptian authorities closed the Rafah crossing with the Gaza Strip on Friday, the Gaza Interior Ministry said.

"Egyptian authorities told us that the terminal had been closed," the ministry said in a statement.

Egyptian authorities on Thursday opened the Rafah border crossing with the Gaza Strip to allow the entry of Palestinians injured in three days of fierce aerial bombardments by Israel, allowing only 11 injured Gazans to cross.

The ministry regretted the Egyptian move to close the crossing, saying that it reflected "indifference to the suffering of travellers and wounded".

At least 98 Palestinians-mostly civilians-have been killed and hundreds injured in a major Israeli air offensive against the Gaza Strip that began late Monday night, according to reports by the Palestinian Health Ministry.

Since last summer's ouster of Mohamed Morsi-the country's first freely elected president-by the army, Egypt has kept the Rafah border crossing closed for the most part.

The Rafah border terminal represents Gaza's only window to the outside world that is not under Israeli control.

Egyptian authorities generally only open the crossing for exceptional cases and for limited periods of time.