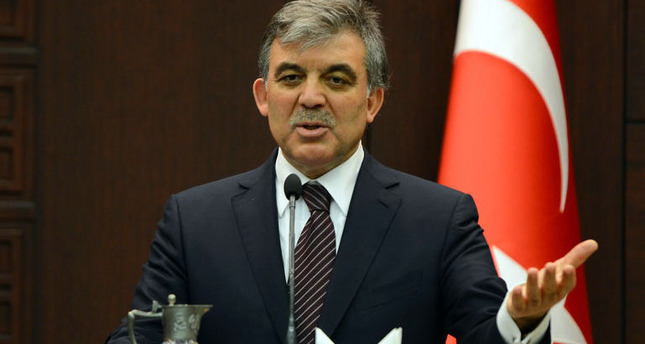 by Daily Sabah Jul 11, 2014 12:00 am
Commenting on deadly Israeli assaults on Gaza -- which killed 100 people and injured nearly 700, many of whom are women and children -- Turkish President Abdullah Gül called Israel to immediately halt its airstrikes and to never think of a ground invasion in Gaza.

Answering questions raised by members of the press after the Friday prayer in Ankara, Gül said he is ashamed and deeply saddened of developments in Middle East. He later accused Israel with trying to take advantage of the chaos in the region by "bombing Palestinians from both land and sea, demolishing houses and killing innocent people. I interpret these incidents as a dangerous development."

President Gül warned Israel not to conduct a ground invasion in Gaza, saying that such assault would create very dangerous developments and such invasion would "seed sources of a huge hatred in the region."

Furthermore, Prime Minister Recep Tayyip Erdoğan spoke to Palestinian President Mahmoud Abbas and the head of Hamas' political bureau, Khaled Mashal on Thursday, reiterating Turkey's condemnation of Israeli attacks. During the conversations, Erdoğan called on Israel to immediately cease its assault as Israel deployed more troops for a potential ground incursion, seen by experts as a risky venture if initiated.

Erdoğan called for an urgent ceasefire and announced that humanitarian aid will be sent to the Gaza Strip and called on the international community to take action to halt Israeli aggression. Experts believed the recent Israeli attacks have a negative impact on already stricken Turkey-Israel relations.