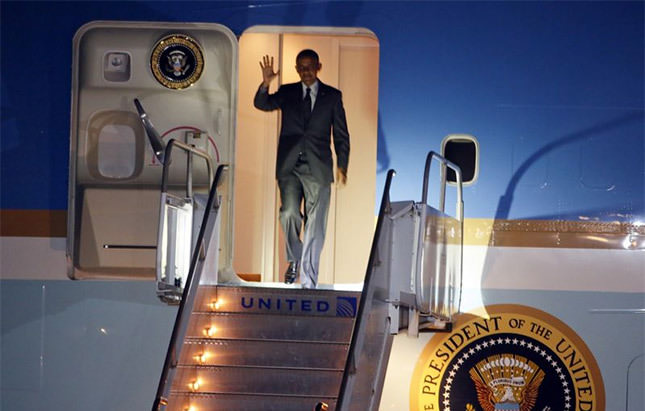 by Associated Press Jul 11, 2014 12:00 am
President Barack Obama offered the help of the United States on Thursday in negotiating a cease-fire to end escalating violence between Israel and Hamas, as world leaders warned of an urgent need to avoid another Israeli-Palestinian war that could engulf the fragile region.

In a phone call with Israeli Prime Minister Benjamin Netanyahu, Obama lent his support to Israel's efforts to defend itself against an onslaught of rocket fire from the Hamas-controlled Gaza Strip, but he also called on both Israel and the Palestinians to protect civilians and restore calm. The White House said the U.S. was willing to "facilitate a cessation of hostilities," potentially along the lines of a 2012 cease-fire that the U.S. helped broker.

Mounting casualties and the growing prospect of an Israeli ground incursion in Gaza drew alarm at the United Nations, where Secretary-General Ban Ki-moon told an emergency Security Council meeting that it is more urgent than ever to avoid another Israeli-Palestinian war that could engulf the entire region. He called on both sides to agree to a cease-fire.

"It is unacceptable for citizens on both sides to permanently live in fear of the next aerial attack," Ban said.

More than 85 people have been killed, including dozens of civilians, since Israel began an offensive on Tuesday in Gaza. The offensive aims to put an end to unrelenting rocket fire from Gaza that has reached ever deeper into the Jewish state and intensified amid spiraling tensions over the killing of three Israeli teenagers and the apparent revenge killing of a Palestinian teenager.

The offer to help bring about a cease-fire could draw the U.S. deeper into a conflict the U.S. fears could destabilize the region, but precisely what role the U.S. would play remains unclear. The United States considers Hamas to be a terrorist organization and has a policy barring contact with its leaders.

A senior Obama administration official said that policy hasn't changed but that other players in the Mideast could act as intermediaries, as was the case when Egypt and former Secretary of State Hillary Rodham Clinton worked to secure the November 2012 cease-fire. Egypt, Turkey or Qatar are all possibilities, said the official, who demanded anonymity to discuss sensitive diplomatic matters.

In the phone call, Obama also raised his concerns about Tariq Abu Khdeir, a Palestinian-American teenager who was detained and apparently beaten by Israeli authorities.

"The president expressed concern about the risk of further escalation and emphasized the need for all sides to do everything they can to protect the lives of civilians and restore calm. But he also urged both sides not to escalate the crisis," the White House said in a statement.

In a moment of drama at the U.N., Israel's ambassador suddenly played the piercing 15-second siren that warns Israelis to run to bomb shelters to escape rocket attacks to highlight the threat his country faces. Ron Prosor told the council that Hamas is "intentionally and indiscriminately" threatening 3.5 million Israelis and "no nation, no people and no government could tolerate this."

Palestinian U.N. envoy Riyad Mansour had no props for his appeal to the council "to stop the bleeding" and revive the Palestinians' "dying hopes" for an end to the conflict and peace with freedom. "I speak on behalf of the suffering and grieving Palestinian people, who are enduring yet another barrage of death, destruction, trauma and terror," he said.

Yet he rejected Israel's "audacious claims" that Palestinians are being used as human shields "while it knowingly and intentionally strikes at densely populated civilian areas." The Palestinians also reject Israel's claims to self-defense while "it deliberately carries out reprisals and collective punishment" for the three Israeli teenagers' deaths, which the Palestinian leadership has condemned, he said.

Diplomats said Jordan has circulated a press statement, which is not legally binding, for the Security Council's consideration that would call for a cease-fire.

The draft, obtained by The Associated Press, calls for "immediate calm and ending the hostilities in Gaza including the launching of rocket attacks," restoration of the 2012 cease-fire and resumption of direct Israeli-Palestinian negotiations aimed at a comprehensive peace agreement and a two-state solution. It also calls for protection of civilians.

The secretary-general, who is engaged in intense global diplomacy over the crisis, called for "bold thinking and creative ideas" to end the violence.