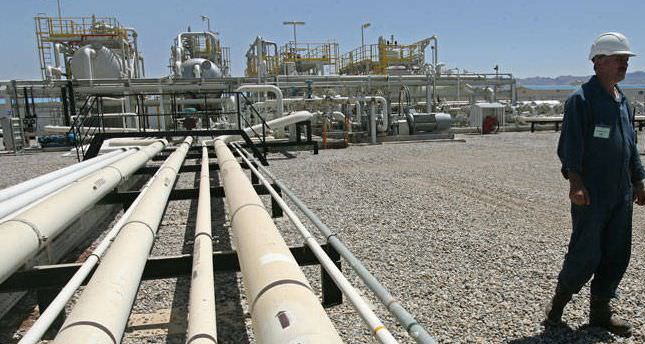 by Anadolu Agency Jul 12, 2014 12:00 am
Iraqi forces battled a militant attack on the key city of Ramadi Friday, while Baghdad accused the Kurds of seizing oil fields, further dashing hopes politicians could unite to save Iraq from break-up. The militant push to take Anbar provincial capital Ramadi comes two days before a planned parliamentary session meant to revive flagging efforts to replace the caretaker government in power since April elections. ISIS has seized several areas west of Ramadi since the fighting began Thursday afternoon, killing 11 police, bombing a police station and taking control of another, a police lieutenant colonel and a doctor said.

The officer said the insurgents were attempting to "storm Ramadi from the western side." The fall of the city, where anti-government fighters have held shifting areas since the beginning of the year, would be a major advance for ISIS militants, who have overrun large areas of five provinces, including parts of Anbar, since June 9. It could increase the threat on the capital by solidifying militant positions in Anbar and breaking the isolation of rebel-held Fallujah, which lies only 60 kilometers (37 miles) west of Baghdad. As the battle for Ramadi raged, Iraq's oil ministry accused the country's autonomous Kurdish region of seizing key northern oil fields. The ministry said Kurdish forces had seized "crude oil (wells) in the Kirkuk and Bey Hassan oil fields" Friday morning.

Kurdish peshmerga fighters have moved into swathes of disputed northern areas vacated by Iraqi forces during the initial militant offensive, and regional president Massoud Barzani has said they will stay there. Maliki has accused Barzani of exploiting the chaos created by ISIS and said the region was hosting militants involved in the offensive. That claim drew derision from Barzani's office, which shot back Thursday that Maliki "has become hysterical and has lost his balance." Saying Malik had "destroyed the country," it demanded that he "apologize to the Iraqi people and step down." Control over the Kirkuk region and its oil wealth would be the realization of a long-held Kurdish dream, and Barzani's announcement this month that a referendum on independence was in the works has enraged the Shiite Arab premier. The escalating war of words between Maliki and the Kurds has already cast a pall over the parliamentary session slated for Sunday. So far, international calls for feuding politicians to come together to face the militant offensive have gone unheeded.In a sign of what may be to come in parliament,

Kurdish ministers said Maliki's stance "only served the enemies of Iraq and the terrorists" and announced they were boycotting cabinet sessions. Meanwhile, Iraq's top Shiite cleric, Grand Ayatollah Ali Sistani, urged fighters on Friday to respect the rights of all Iraqis, regardless of sect or politics, after an escalation in apparent sectarian killings in recent weeks. "We would like to stress to all our armed forces and those volunteers who have joined them ... the necessity of strict and full commitment in taking care of the rights of all the people, and not to transgress against any innocent citizen no matter their sectarian or ethnic affiliation or whatever their political stance," Sistani said in a sermon delivered
by an aide.
RELATED TOPICS