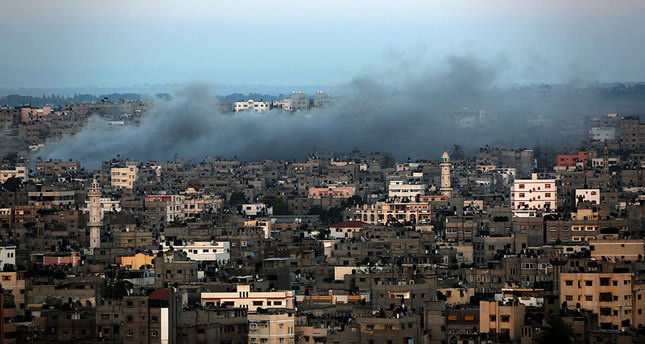 by AA Jul 12, 2014 12:00 am
Israeli aircraft struck the headquarters of the Islamic National Bank in the southern Gaza Strip city of Khan Yunis in the early hours of Saturday, with no causalities reported.

The building has been completely burned and several nearby houses have been severely damaged, according to Anadolu Agency reporter.

Palestinian medical sources said no causalities had been reported from the attack.

At least 118 Palestinians, mostly civilians, have been killed in Israeli strikes since late Monday.

More than 904 Palestinians have also been wounded in the aerial attacks.

Some 282 houses have been completely destroyed and 8910 partially damaged in the Israeli aerial attacks, according to Palestinian official sources.

They have fired more than 600 rockets since Monday, according to security sources.

Israel bombed the Islamic bank during an eight-day onslaught on the besieged coastal enclave back in 2012.