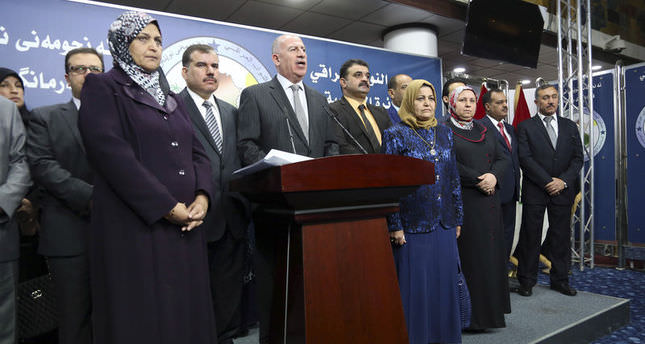 by Jul 13, 2014 12:00 am
Iraq's parliament failed on Sunday to break a damaging political deadlock which is holding up the formation of new government to tackle a terrorist insurgency raging less than 50 miles (80 km) from Baghdad.

After a brief session, parliamentary officials delayed until Tuesday their efforts to reach agreement between the country's Shi'ite, Sunni and Kurdish politicians on the posts of prime minister, president and parliamentary speaker.

Prime Minister Nuri al-Maliki, whose State of Law coalition is the largest individual list in parliament, is seeking a third term but faces opposition from Sunnis and Kurds who say he has ruled for the Shi'ite majority at the expense of minority communities. Even rival Shi'ite parties want to unseat Maliki.

The political impasse has been given added urgency by the insurgency which swept through Sunni provinces of northern Iraq last month and was only stemmed within a hundred miles from the capital. The fall of northern Sunni cities has encouraged Maliki's opponents to try to force his departure.

The disagreement over Maliki's future appeared to be blocking progress on the other political posts.

Sunni politicians said the main Sunni bloc put forward Salim al-Jabouri, a moderate candidate, as their candidate for speaker, but accused Maliki of effectively torpedoing their proposal by linking it to their acceptance of his bid for a third term.

"We have presented our candidate for speaker and done what we should do," said outgoing speaker Osama Nujaifi. "We hold the other blocs responsible for the delay.

"Once we manage to complete the democratic process to form the government, this would help to stop the great destruction happening in Iraq which is jeopardizing the country's unity."

An arrest warrant on terrorism charges was issued in 2011 against Jabouri, who was serving on parliament's human rights committee at the time. He had confronted Maliki over abuses against prisoners in special jails in the fortified Green Zone of central Baghdad where parliament is also located.

The charges were dropped after the April election amid rumors that Jabouri would back Maliki to remain as prime minister. But Saleh Mutlaq, a prominent Sunni politician, said that kind of deal would be rejected by many of his fellow Sunni lawmakers.

"We have presented Salim al Jabouri and Maliki put a condition - in order to approve Jabouri as speaker, he himself should be approved as prime minister," he said. "This is something we don't accept."

Iraq's political elite are under pressure from the United States, the United Nations and Iraq's own Shi'ite clerics to reach agreement so politicians can deal with the insurgency and prevent the country fragmenting on sectarian and ethnic lines.

The U.N. special envoy to Iraq, Nickolay Mladenov, said the country could plunge into chaos if parliament fails to move forward on a government in Sunday's session. Violent deaths last month reached more than 2,400 -- a level comparable to the worst of the bloodshed seen during Iraq's 2005-2008 sectarian war.

Two hundred and thirty-three out of 328 deputies attended Sunday's short meeting, a significant improvement on the July 1 session, when only a third turned up.