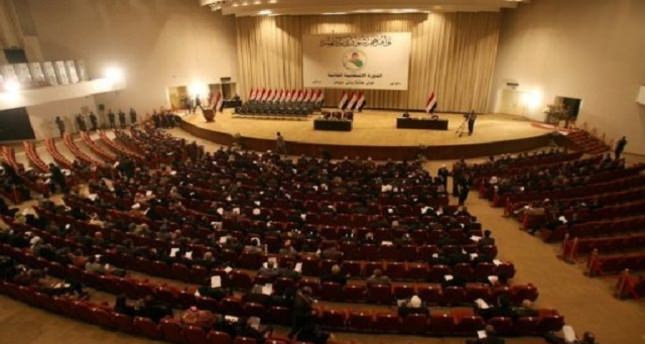 by Daily Sabah Jul 14, 2014 12:00 am
The Iraqi parliament has failed to elect its speaker yet again, with pundits noting that three political blocs could not agree on who to nominate amid serious upheaval in the country due to ISIS attacks near the capital, Baghdad.

Iraqi parliament's second session to agree on a new parliament speaker failed again, extending the political impasse in the country. Mahdi Hafez, the most senior lawmaker, postponed the session until Tuesday indicating that the three political blocs "have not yet resolved their disagreements over who to nominate for the posts."

Considering the political deadlock, "I hope you will show a sense of responsibility and flexibility so that we can reach an agreement," Hafez told lawmakers, as DPA news agency reported.

In an attempt to name a unity government, which would help the country oust ISIS militants, the new Iraqi parliament ended its first session in disarray after failing to agree on potential candidates for the parliament speaker position. The deadlock prompted the second session to be postponed until yesterday. According to AP news agency, Sunni lawmaker Mohammed al-Karbooli said in a statement late Saturday that Sunni parties decided on Salim al-Jubouri as their nominee for speaker. He said al-Jubouri promised not to support a third term for embattled Prime Minister Nouri al-Maliki, who is under pressure to step aside. Reports state that this would be likely to end the eight-year rule of Shiite Prime Minister Nouri al-Maliki, considered as a polarizing figure in the country's political history.

The U.N. special envoy to Iraq, Nickolay Mladenov, said Iraq could plunge into chaos if parliament fails to move forward on a government in the second session, according to Reuters.

As the violence-stricken country has been gripped by chaos since the first clashes broke out and seized the country's second-largest city Mosul on June 10, it also led to thousands of Iraqi people to leave their home and become displaced. In addition, the United Nations reported earlier that a
significant number of Iraqis were killed during the heavy clashes between ISIS militants and Iraqi government forces.

After the 2003 U.S.-led invasion, the speaker's chair goes to a Sunni, the presidency to a Kurd and the prime minister's post to a Shiite. In the past, Iraq's three main political blocs agreed to all three posts, as AP reported.
RELATED TOPICS