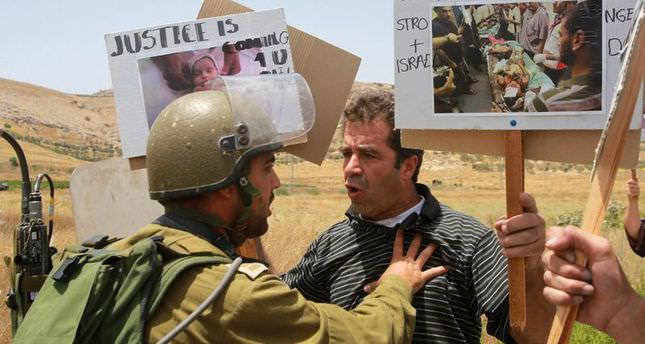 by Anadolu Agency Jul 14, 2014 12:00 am
Israeli troops shot dead a Palestinian man during clashes with stone-throwers in the occupied West Bank on Monday as tensions mounted over Israel's military offensive in Gaza.

Israeli army forces also detained 18 Palestinians, including 11 Hamas lawmakers in the West Bank, according to a local NGO.

He said the Israelis also detained Abdel Sattar Qassem, a professor and author of numerous publications on Palestinian history and Islamic thought, from his house.

Qassem is an outspoken critic of Palestinian Authority President Mahmoud Abbas and peace talks with Israel.

The Palestinian Prisoners Society, a local NGO, said earlier that the Israeli army had detained around 1000 Palestinians in the West Bank since the disappearance and the subsequent death of three Jewish teens in June.

It said that the detained Palestinians included 23 lawmakers as well as 60 ex-detainees who were released as part of a 2011 prisoner swap.

Israeli authorities have been launching a restless campaign of detention in the West Bank since three Jewish teens went missing in a southern West Bank settlement on June 12.

The Israeli army has also been pounding the Gaza Strip since Monday, killing at least 173 Palestinians, injuring more than 1200 people and destroying hundreds of homes.