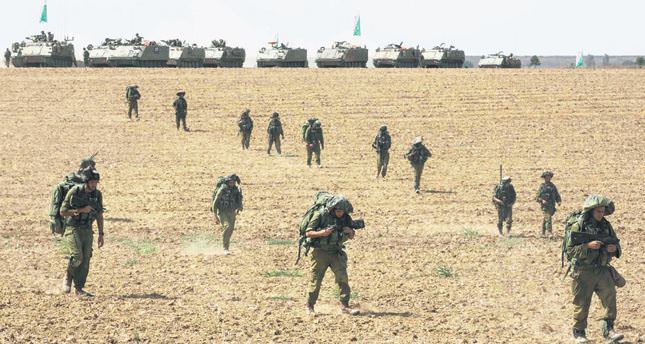 The Israeli military assault on the Gaza Strip, which has claimed at least 166 lives, enters an even deadlier phase as ground troops and tanks are deployed in the region

Following the announcement of deployment of ground troops inside the Gaza Strip for the first time yesterday morning, Israeli commandos made their first ground incursion in Gaza in addition to a series of heavy airstrikes. Israel's Gaza ground operation is believed to have deteriorated the already strained relationship between the two sides. Meanwhile, Israel has reportedly continued to launch fresh strikes in Western Gaza. Israeli navy commandos attacked a position of Hamas that has been used to fire missiles from the Gaza Strip into Israel, reports said yesterday.

Meanwhile, the Israeli army has reportedly asked Palestinians living in the northern part of the Gaza Strip to evacuate the residential areas later on Saturday, an army spokesman said, according to Anadolu Agency (AA). "

Statements asking the residents of northern Gaza to leave their homes for their safety from Hamas terrorism will be distributed tonight," army spokesman Avichay Adraee added on his Twitter account.

As the tension escalates in the Gaza Strip, France's foreign minister, Laurent Fabius called yesterday for an urgent ceasefire, regarding the deathly Israeli assault, while calling the recent attacks "absolutely disastrous." "France, like the U.N. Security Council, calls for a return to the truce of 2012," said Fabius. According to the latest reports, the foreign ministers of Germany and Italy would be expected to travel in the Middle East this week, regarding the necessity of diplomatic efforts to put an end to intensified bloodshed in the Gaza Strip.

The U.N. Security Council called unanimously for a cease-fire Saturday. Israel Prime Minister Benjamin Netanyahu rejected talks of ceasefire, saying no Gaza truce is in Israel's agenda as Haaretz daily newspaper reported 10 June. PM Netanyahu stated earlier that Israeli attacks would be stopped only when "a complete cessation of Gaza-launched rocket attacks against Israel" occurred. On the third day of the Gaza military campaign, Hamas has announced the conditions for a possible truce between the two sides in a recorded statement broadcasted on Hamas' al-Aqsa television, according to DPA news agency. In order to stop Gaza-launched rocket attacks against Israel, Hamas demanded lifting the blockade of the Palestinian territory, stopping arrests in the West Bank and Israel-led sabotage of the newly formed Palestinian unity government in an exchange for a truce.

In addition to the U.N. calling for a ceasefire agreement, the international pressure from various countries, has been urging Israel to stop its deathly attacks, targeting on residential areas, and thus killing mainly civilians.

The U.S. has showed its willingness to broker a ceasefire between Hamas and Israel. According to a White House statement on 10 June, the U.S. President Barack Obama has phoned Israel Prime Minister Benjamin Netanyahu to offer U.S.-brokered arrangement for negotiating a truce.
As part of a widening military campaign, Israel widened its range of Gaza bombing targets Saturday to include civilian institutions. One strike reportedly hit a center for the disabled, killing two patients. In an another attack, an Israeli warplane targeted a mosque in the Gaza Strip after evening prayers ended, killing at least 18 people and wounding 50, officials told AP news agency.

The Palestinian Health Ministry has accused Israel of using banned weapons in pounding the Gaza Strip. Speaking in a press conference held in Gaza city late Saturday, the Palestinian Health undersecretary Youssef Abul Resh stated that "Medical teams have found wounds on the bodies of those killed and injured that are caused by the banned DIME weapons. Foreign doctors in Gaza have confirmed that Israeli missiles and shells are destructive and internationally banned," he added.

Israel has launched more than 1,300 air strikes since the offensive began, military spokesman Lt. Col. Peter Lerner said yesterday, as the death toll has risen to 166, according to the latest reports. Among those killed, at least 33 children and 16 women were reportedly among the fatalities of the Israeli onslaught, according to the Palestinian Health Ministry.

The tensions have escalated between the Israeli military and the Palestinian group Hamas over the discovery of the bodies of three Israeli teenagers and the subsequent murder of a Palestinian teenager.
RELATED TOPICS