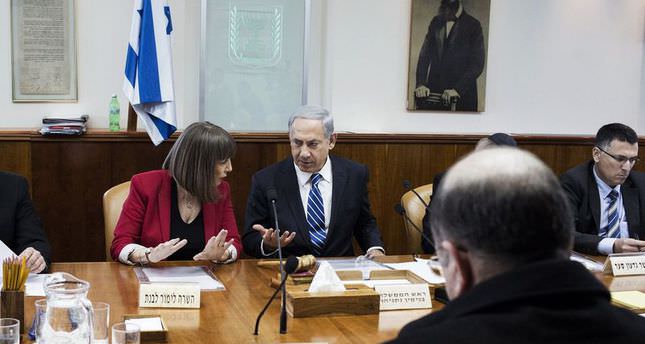 by AA Jul 14, 2014 12:00 am
A minor Israeli cabinet decided during a one-hour meeting late on Sunday to maintain military escalation against the Gaza Strip, an Israeli source said.

The source told Israeli news channels that the cabinet had decided to step up the military campaign in Gaza in order to destroy the infrastructure of the Gaza-based resistance movement Hamas.

Referring to Egyptian efforts to bring about a ceasefire in Gaza, the source said Egypt would be the only country allowed by Israel to mediate this ceasefire.

A senior leader of Hamas, meanwhile, referred earlier to Qatari mediation, saying Qatar had delivered a message to Hamas from the U.S. about the movement's terms for agreeing to a ceasefire.

The leader added that his movement had not received any "serious" proposals in this regard, noting that the movement is only getting ready to counter a potential Israeli ground operation in Gaza.

Around 170 Palestinians, mostly civilians, have been killed and hundreds injured since Israel launched "Operation Protective Edge" in the Gaza Strip on Monday with the stated goal of ending rocket fire from the strip.

Since then, Israeli warplanes have staged hundreds of airstrikes on the Gaza Strip – home to around 1.8 million Palestinians - while ground troops remain amassed on the Strip's borders in advance of a possible ground assault.