'Mothers of all Palestinians should also be killed,' says Israeli politician 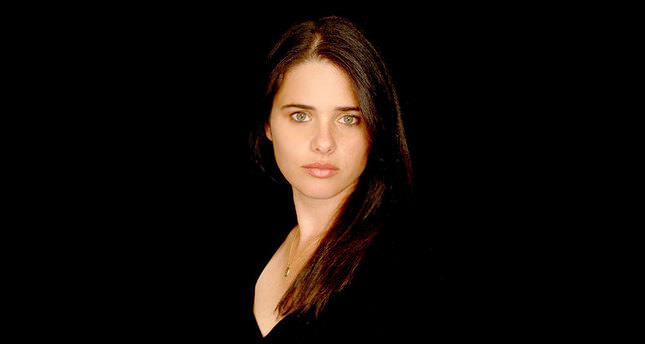 by Daily Sabah Jul 14, 2014 12:00 am
As the situation widely deteriorates in the Gaza Strip, Israeli parliament member and law-maker Ayelet Shaked has stigmatized all Palestinians as terrorists, wishing death on all Palestinians while supporting the Israeli military assault.

On Monday Shaked quoted this on her Facebook page: "Behind every terrorist stand dozens of men and women, without whom he could not engage in terrorism. They are all enemy combatants, and their blood shall be on all their heads. Now this also includes the mothers of the martyrs, who send them to hell with flowers and kisses. They should follow their sons, nothing would be more just. They should go, as should the physical homes in which they raised the snakes. Otherwise, more little snakes will be raised there."

"They have to die and their houses should be demolished so that they cannot bear any more terrorists," said Shaked. Standing behind the operations on Gaza, "they are all our enemies and their blood should be on our hands. This also applies to the mothers of the dead terrorists," Shaked added.

A day before Palestinian teenager Muhammad Abu Khudair was kidnapped and burned alive allegedly by six Israeli Jewish youths, Shaked published on Facebook a call for genocide of the Palestinians.

The posts were considered as a call for genocide because it declared that "the entire Palestinian people is the enemy" and justifies its destruction, "including its elderly and its women, its cities and its villages, its property and its infrastructure." she also called for the slaughter of Palestinian mothers who give birth to "little snakes."

An Israeli writer posted an article after Shaked's posts entitled 'Why I'm on the brink of burning my Israeli passport' saying that "I can no longer stand by, while Israeli politicians like Ayelet Shaked condone the deaths of innocent Palestinian women and children".

"She is young. She is pretty. She is a university graduate and a computer engineer. She is also an Israeli Parliamentarian - and the reason why I am on the brink of burning my Israeli passport. Because behind that wide-eyed innocent face lurks the Angel of Death" the writer added in her article.

Since last Monday, Israeli warplanes have struck more than a thousand targets across the besieged enclave, which is home to around 1.8 million Palestinians killing more than 190 people.

Following the elections on March 15, 2015, Israeli Prime Minister Benjamin Netanyahu formed the most right-wing coalition government in Israel's history on May 6, as he agreed on a pact with Naftali Bennett – the leader of the Jewish Home party, the country's pro-settlement ultranationalist political force that opposes a two-state solution to conflict between Israel and Palestine.

The alliance between Netanyahu, which had a slim majority in the Knesset after the March election, and Bennett's Jewish Home has already drawn criticism from Israel's left as well as from Palestinians, most strikingly for the assignment of Ayelet Shaked as the new Justice Minister.