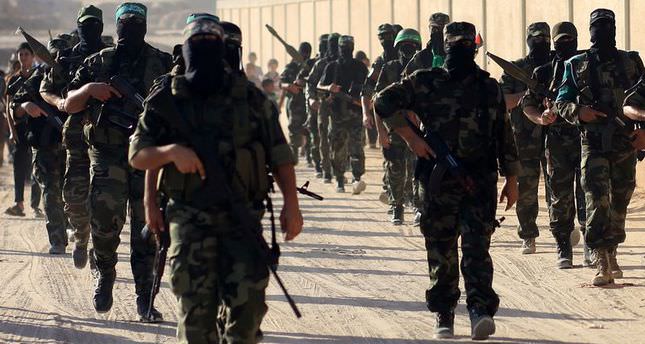 by AA Jul 14, 2014 12:00 am
The Ezzeddin al-Qassam Brigades, the military wing of Hamas, announced late Sunday that its militants had clashed with Israeli special forces that had staged an incursion into central Gaza Strip.

"A group of our fighters clashed with Israeli troops near the eastern areas of the central Gaza Strip city of Deir el-Balah and forced them to retreat," the Brigades said in a statement.

A unit of Israeli naval forces had attempted an incursion through the northern shores of the Gaza Strip on Saturday before being pushed back by Hamas fighters.

Israel has launched a military operation – dubbed Operation Protective Edge - with the stated goal of ending rocket fire from the Gaza Strip.

Since then, Israeli warplanes have staged hundreds of airstrikes on the besieged enclave – home to around 1.8 million Palestinians - while ground troops remain amassed on the borders in advance of a possible ground assault.

At least 172 Palestinians, mostly civilians, have been killed in Israeli airstrikes on the Gaza Strip since late Monday.

Some 1183 people have also been wounded in the Israeli aerial attacks.